Bug introduced in v9 or earlier and persisting through v10.3.0

Has anyone the same problem or is it localized to me and why ?

Here are the tests :

This is how it looks :

For comparison, this is how it looks when you omit the shape and scale : 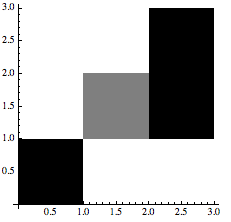 According to the documentation (V9 or v10), it should be possible to convert a Raster primitive directly into an Image object :

Whether I am using version 9 or 10.0.1, the raster is not correctly converted: the shape and scale of the raster were not taken into account !?

According to the documentation (V9 or v10), Image@Graphics effectively uses the Rasterize function.

But how is it possible that in v10, Image@Graphics does not work if it effectively uses Rasterize which does work ... !??

Good question. I believe it is the result of an incomplete attempt to optimize conversion of Raster objects to Image objects; a bug in other words. Note that when the axes are included the output is correct:

Trace of the correct conversion

Running a Trace with option TraceInternal -> True on Image @ Graphics[myraster, Axes -> True] (very slow to print) reveals that this call is made:

This sends an ExportPacket of type "BitmapPacket" to LinkObject["daahs_shm", 3, 1] which is apparently a library that does the actual conversion.

Note that the complete Raster data is preserved in this ExportPacket in the form of a RasterBox.

Trace of the incorrect conversion

However when Image[myraster] is used something else entirely is observed. First it is handed off to:

The array data is extracted (omitting your shape and scale data):

This data is "massaged" a bit for color space, packing, etc., then sent to Image, e.g.:

Some other options are used but nowhere in this call is the shape or scale data used.

When the Graphics expression contains only a Raster a different function is called but the result is the same. First it is passed to:

So we have conversion to Box form, unlike Image[myraster], but then the array data is extracted and passed to Image as above, again without accounting for the second and third parameters of Raster (or RasterBox) as far as I can tell.

It is worth noting that the Trace on Image[myraster] is much shorter than on the full conversion shown at the top of this answer, so the idea of optimization is not misplaced. However it is not yet complete.

For now it is possible to bypass this incomplete optimization merely by wrapping the Raster in List:

Not the answer you're looking for? Browse other questions tagged graphics bugs image rasterize or ask your own question.

20
Using Inset[..] to overlay a Graphics3D with its raster version
4
Measure relative lengths of rectangular objects
11
FontSize problematic when used in LabelStyle
0
drawing consecutive lines / raster pattern
5
How to scale and shift the coordinates of a Graphics object?
0
Rasterize resets the PlotRange?