Is there a linter to help write good Mathematica code?

I don't do much real programming, but I've recently been turned on to Atom, which has linter plugins for over 50 languages to make coding easier (most drawing on pre-existing lint-like programs).

In other languages, linters help me learn about operator precedence (unnecessary parentheses), good programming styles/techniques, and get warnings about code that may not have been intended. Is there something along these lines for Mathematica?

If not, is there a reason why not? At first glance it seems like a number of the suggestions/tips I pick up from reading answers here could be automated. For example, maybe the Mathematica linter would remind you to memoize your functions with f[n_]:=f[n]= if that setting is turned on.

Edit: For a couple days in November 2016 there was work on a linter for Atom for Mathematica on github, but the project seems to have died quickly and I couldn't get it to work.

I am a developer at Wolfram Research and I have been working on linter technology that I think would be nice to share publicly.

There are 2 paclets on the public paclet server that you can download and use for finding problems with WL code.

CAVEAT: These paclets are experimental and not yet fully-formed, but they are constantly being worked on.

The two paclets you will need are AST and Lint:

The AST paclet provides functions for parsing WL code and returning syntax trees with interesting metadata attached, such as file and line information.

The Lint paclet uses AST and provides functions for scanning WL code and finding problems and reporting them.

Here is a demo of using the Lint paclet.

Next, take a snippet of code that you are interested in linting.

Use LintString to get a List of Lint objects:

The Lint objects are interesting by themselves, but it would be nice to see them formatted within lines of the source code.

The report shows formatted lines that you can mouse over to see the problem descriptions.

I included a screenshot to better show the result. 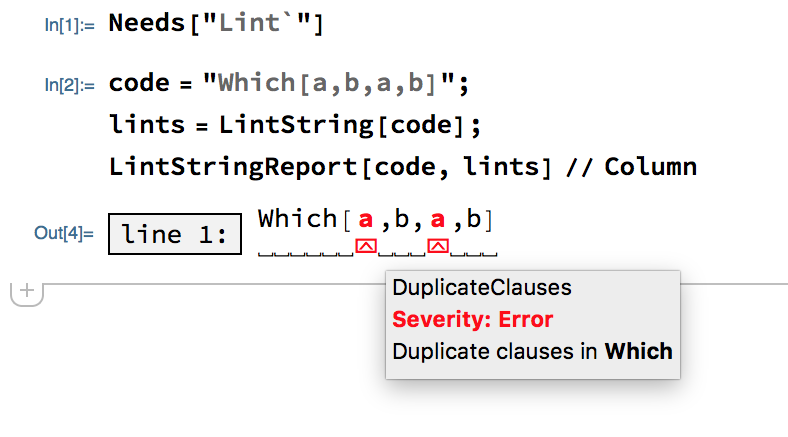 It is possible to also scan files with LintFile and LintFileReport.

The linter is very rudimentary right now, but it is constantly improving. It has already proven useful internally. Eventually I would like to solicit the community for more ideas for rules for the linter. I hope you enjoy using it!

Not the answer you're looking for? Browse other questions tagged performance-tuning programming syntax or ask your own question.

458
What are the most common pitfalls awaiting new users?
4
Highlighting values in a dataset

12
What is the fastest way to find an integer-valued row echelon form for a matrix with integer entries?
67
when is f@g not the same as f[g]?
133
General strategies to write big code in Mathematica?
9
Optimizing Mathematica Code
4
Mathematica code execution speed testing