I have always thought that f@g will give the same result as f[g] in all cases, and it is just a matter of style which one to use and that g will always evaluates first, and then f will evaluate using the result of g evaluation. I never thought that there can be any precedence issue here, since no one ever mentioned it in all the times I have been using Mathematica.

So I was really surprised when I found one case where this was not so. So my question is: How does one know when f@g is not the same as f[g] ?

The help says nothing about this (thanks to chat room for giving me the link to this, I searched and could not find it)

Prefix[expr, h, precedence, grouping] can be used to specify how the output form should be parenthesized.

clearly this is a precedence issue. But I have never seen this mentioned before any where.

What seems to have happened is that in Tr@Times@@@.... the command Tr grabbed Times before Times was applied. You can replaced Tr by Total also and see the same effect.

ps. This is another reason for me to not use @ too much. I I really never liked to use @ and always liked the good old fashioned [] as it seems clearer also, and now safer also.

question is: What is the rule(s) of thumb to use? One should always look ahead and check before using @ to make sure precedence is met? Any other cases than this one might have to watch out for? If there are very few cases, may be one can add them to their cheat sheet. Where are the precedence of all operators listed so one can check?

Unless one wishes to write in FullForm a competent Mathematica user must be familiar with at least the majority of syntax precedence rules, which are described in the Operator Precedence table.

Clarification: I do not mean that one must memorize (most of) this entire table be competent, but rather that one should know it well enough not to be surprised most of the time. Since memorizing the complete table is impractical (for me at least) I recommend having analysis tools at the ready when writing or reading code.

Here is an excerpt from that table: 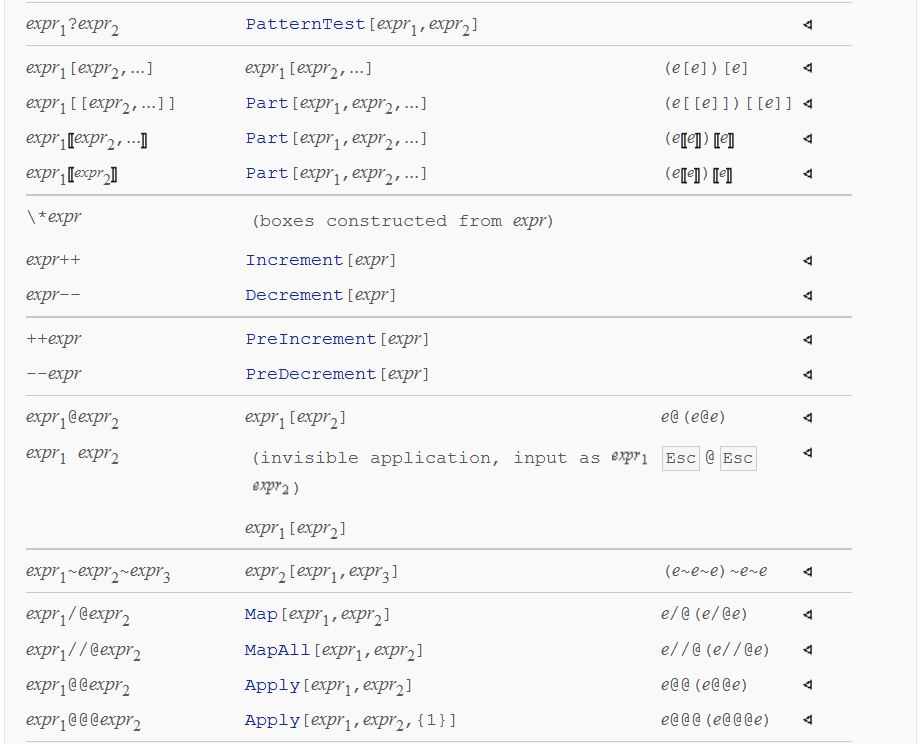 It can be seen that expr1 @@@ expr2 is well below expr1 @ expr2 on the table which means that @ has greater binding power than @@@. In other words:

You can see that there are a number of forms between expr1[expr2] and expr1 @ expr2 -- these are the cases where the two will behave differently in a potentially unanticipated way. For example:

Of course the relatively high binding power of @ (see the rest of the table) means that many such things as f @ g + h are interpreted f[g] + h rather than f[g + h]. Most operators and input forms have lower binding power than @ so this behavior should be evident with minimal experimentation.

In addition to these the excerpt includes a couple of other interesting forms. The first is PatternTest which is unusual for having greater binding power than application brackets, therefore:

The second is infix notation a ~f~ b (which many people know I am found of). This has lower binding power than @, and it is left-associative which means:

There is an undocumented function Precedence that when applied a Symbol gives the precedence of the corresponding operator, if one exists. Here is my effort to match its output to the order declared in the table above:

I don't know if there is a Symbol that corresponds to expr1[expr2] but since the default precedence value (illustrated arbitrarily by default) matches its location in the table I don't think it matters.

If you are looking for complete answer, take a look at Mr. Wizard's :)

Also, see the comments of @JacobAkkerboom below, who proved I was too hasty. :)

I was right that the function OP is asking about at the end is Precedence but I was wrong in my interpretation of what is happening.

I will leave this for future visitors as it is not so obvious.

Also, everyone that upvoted, feel free to un-upvote if you wish :)

Precedence of functions is given by Precedence :)

More here: What are some useful, undocumented Mathematica functions?

"Good old fashioned" [] is safer but I really like @, I just have to remeber what is going to happen basing on my experiece, because no one will remember all precedences :)

In fact, sometimes I like to do f @ ( some code ). The more different brackets, the more transparent code is, IMO.

So that's why Tr[Times] is done before Times is applied to the list.

What is also an answer to your question about precedences of functions. It is Precedence, an undocumented function.

There is a discussion about what @ is. In my opinion f @ g does not mean that there's operation Prefix with f on g. Prefix is only a syntax form(?). What is happening is:

More about Compose: Why there is no name... (this link is true itself :P)

As you see the wrong part is longer...

Not the answer you're looking for? Browse other questions tagged programming operators function-comparison precedence or ask your own question.

6
Order of operations, precedence in Mathematica
3
What does the @ symbol do in Mathematica?
1
Chaining map and abstract functions -- when (and why) is parenthesization necessary?
0
The order of evaluations with nested slots
1
Length[Range[5]] vs Length@Range[5]
1
Getting different results form Tan[x] and Tan @ X
1
Learning Shortcut Syntax - Newbie Question
578
Where can I find examples of good Mathematica programming practice?
192
What are some useful, undocumented Mathematica functions?
40
How to examine the structure of Graphics objects
See more linked questions

16
ParallelTable and Table do not give same result
8
Why does Mathematica choose the second function definition?
5
Should Row be used in place of StringForm?
0
Why does memory run out when adding same-sized matrices in a loop?
7
How to construct custom operators with precedence?
2
How to define a number of infix operators with predefined relative precedences
5
What is the point of StringForm?
9
Reconstructing ContourPlot with ListContourPlot
2
Operator Precedence in Notation Package
21
Series vs Asymptotic in 12.1