How are parameters evaluated for a Plot in Manipulate

For my specific example, I have a function bigA parameterised by m1 and m2 (this relates to question),

So when I try to plot it in Manipulate,

Nothing appears. I presume this is because m1 and m2 aren't being evaluated. But I don't know what the order is supposed to be.

The thing is, this seems to work when I Evaluate and don't plot, i.e,

So couldn't I just stick a Plot command in there somewhere?

The best solution is to give m1 and m2 as extra arguments:

If for some reason you cannot do that, you can also use replacement rules as follows:

This works because ReplaceAll (/.) does the replacements only after the left hand side has been evaluated, and the mm1 and mm2 are now inside the Manipulate, so they can be properly localized.

By adding Evaluate@ at the beginning of the argument to Manipulate, you override Mathematica's order of evaluation. So with

Now this will not work with Plot, because the whole Plot statement will be executed, before Manipulate will have a chance to insert m1 and m2. So when Plot evaluates bigA[t], it will receive an expression containing m1 and m2 instead of a number, and thus produce an empty graph. This graph (which no longer contains any trace of m1 or m2) will then be passed to Manipulate. Of course replacing m1 and m2 at this stage doesn't work, because they already vanished.

So in essence, while without Evaluate, m1 and m2 are substituted too late, with Evaluate@Plot they are consumed too early.

Now you might have the idea to use Manipulate[Plot[Evaluate@bigA[t],...],...] instead, in order to evaluate bigA[t] (to get m1 and m2 visible) but not Plot (because that only works after m1 and m2 got a value). However that doesn't work either, because Evaluate only affects order of evaluation when it appears as immediate argument of the expression being evaluated. So while evaluating Manipulate, the Evaluate in the argument of Plot is not considered. It will be considered at the time Plot is evaluated, but at that time it's already too late.

A couple of tips:

I updated the code below to encompass your derivative question: 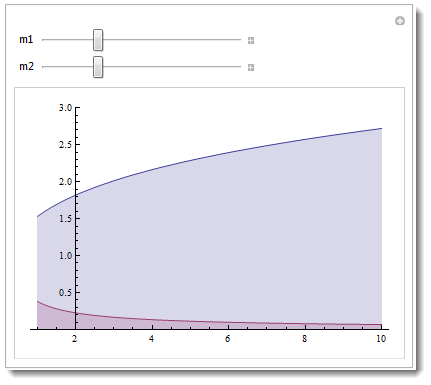 Manipulate does not temporarily change the global value of its variables, as does Table and Do. Compare:

Since your definition of bigA relies on Global` symbols m1 and m2 you must manually change these values, e.g. using Block:

Or you could insert the definition of bigA into manipulate using With so that it appears explicitly (assuming no global values for m1, m2, or t):

Simpler and cleaner is to just parametrize m1 and m2 as belisarius shows.

For example you can do the following to get proper localization

This works and is very simple!!

Copy-paste the definition of the function (or evaluate it and copy the resulting code) to inside the plot. In other words

I understand that this is not the neatest solution, but the big elephant in the room is that this is by far the simplest and most convenient way to circumvent this limitation.

3
Restricting a plotted expression to reals in a Manipuate
7
Nothing appears in simple plot
9
Interactively inspecting parts of an object
20
What is wrong with RuleCondition here?
1
Dynamic Plot of non-linear function within DynamicModule yields dynamically changing constant line instead of expected behavior
3
Using Plot inside a DynamicModule or Manipulate with a variable number of variables