The problem I'm having is that the function definition given below continually gives me baffling error messages.

I'm trying to turn a list of 3D points into a function that approximates a curve by connecting consecutive points with straight lines. If anyone has a smarter way to do that than what I describe below (a smooth curve would be fine too), I'll accept suggestions! Note that it's vital for the curve to be parametric.

The definition says, in words: "define each location on the 'curve' as a weighted average of the two nearest given points, where the points are provided in a list, and each element in the list is a list of three coordinates. (e.g. {{1,1,1},...})." The effect of weighting (given by 'frac' and '1-frac') is to effectively construct a continuous straight line between each two given points. The 'If' statement ensures that when constructing the last point, the function won't attempt to look for a point after the last point.

The call to ParametricPlot3D gives me this error message:

or sometimes (after a few minutes of debugging) it starts giving this instead:

The first set of messages seem to be saying that 's' isn't getting evaluated, which makes no sense to me.

The second set say that I'm trying to access the 102nd point (there are only 101 points), which I believe I'm avoiding with the If statement. The message even persists if I change the parametric range of s to {s, 0.0, 0.5} and if I clear the variable "low" beforehand.

Can anyone explain either of these error messages, and what I'm doing wrong? Is it a misuse of ParametricPlot3D?

For further clarity, here's the output of curve3D (rotated on its side to save space). Note the odd gap in the middle. As you change the parametric range of s (e.g. {s, 0.0, 0.8}) the number and location of the gaps changes. Super weird stuff.

Also, if you want to run my code yourself, here's how you construct the list 'points':

In V9.0.1 you can prevent the error from occurring by changing the definition of curve from curve[s_] to curve[s_?NumericQ]. A related answer here.

I do not see the second error message in any of the four versions.

The gap can be removed by setting the option PlotPoints to for instance 1000:

Interestingly, in V9 after using curve[s_?NumericQ] there's no gap.

If curve is given a non-numeric input the Part specification is not valid and we get:

Part::pkspec1: The expression 1+Floor[100 atom] cannot be used as a part specification. >>

Since symbolic analysis may be used by many Mathematica functions, including plotting, you should restrict the input of your curve function to numeric values using pattern matching.

The second error may be reproduced by entering a s value that is slightly too high:

Plot functions may try values slightly outside the given plot range. This can cause problems just such as this, but I seem to recall that there is a reasonable explanation for this design choice; if I find a reference I shall link it. A solution is to further restrict the input of curve.

Also you should be localizing frac and low with Module.

This answer is not concerned with the error messages your code produces, but to suggest your problem could have been avoided by doing more up-front analysis with Mathematica.

I will begin by looking at the behavior of your potential function. 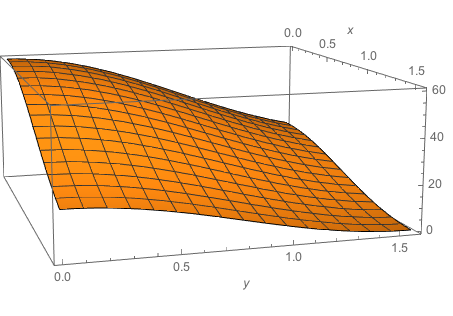 You are seeking the curve generated by the points {x, y, potential[x, y]}, where y minimizes the single variable function potential[x0, y] for some 0 <= x0 <= π/2. The above plot suggests that this curve is not a valley running through the 3D potential surface, but the intersection of the surface with the bounding box wall at x = π/2. Another plot will make this even clearer. It is a 2D plot of the curves of potential for fixed x values. That is, we are looking at the potential surface's intersection with planes parallel to the xz-plane at various x distances. 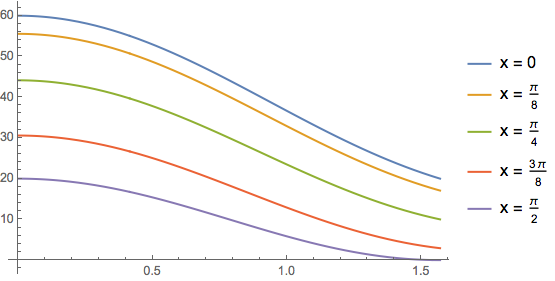 Although I am making a heuristic argument, I find it convincing, and I assert that a plot of the curve you are looking for is given by the following simple expression:

Not the answer you're looking for? Browse other questions tagged plotting functions parametric-functions list-manipulation or ask your own question.

524
What are the most common pitfalls awaiting new users?

9
Is there an easy way to put time ticks on a parametric plot?
8
How do I find the intersection of a closed 3D curve given by numerical data with a specified plane?
50
Find eigen energies of time-independent Schrödinger equation
1
Manipulate wrapping ParametricPlot3D - part spec longer than depth of object?
1
DataRange in plotting Fourier
6
Is Mathematica capable of converting parametric equations into a function? If so, how?
2
Averaging and removing list values
7
Unexpected behavior of `Exclusions` in `ParametricPlot`
8
Finding the point closest to a parameteric curve produced by a numerical method