There are a lot of questions about generating random numbers form both uni-variate and bi-variate distributions. Mathematica has a lot of built in distributions for that purpose. However, I could not do what I wanted to do. I am looking for help.

However, I am trying to get 2000 random variables greater than say 20 from exponential distribution. Similarly, the following code gives me 2000 random numbers a form Farlie-Gumbel-Morgenstern copula.

Any help is greatly appreciated. Thank you in advance. 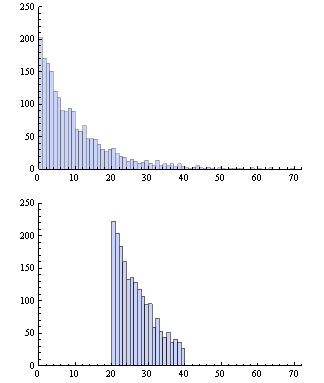 Not the answer you're looking for? Browse other questions tagged random distributions or ask your own question.