I've written my incredibly complex, incredibly elegant analysis function, that works great on small test data. But when I run it on my real (bigger) data set it keeps running out of memory. It turns out that the analysis function does not free memory, but I can't imagine why. It takes a large number of points, but returns only several scalar values. 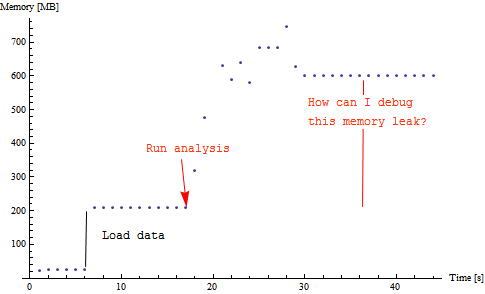 Every time I run this it takes up about 500 MB of memory. (here is another example).

What is the best way to debug memory problems?

I've read the memory management tutorial, turned off caching and verified I have no lingering variables in my contexts and of course I have set $HistoryLength to zero.

EDIT One can use this code to track memory consumption:

I think I finally have a minimum example. Here it is. Unzip to a folder and evaluate the two cells in LeakP.nb. If you evaluate the second cell multiple times you can watch the memory consumption grow. Could somebody (on win7 64 bit mma 8) confirm this?

I really hope I have nailed it down. Here is a self contained example:

It is hard to say what exactly is causing this without seeing the code, but, assuming that there are no memory leaks in the built-in functions you are using, I am only aware of a very few possible causes for memory leaks in Mathematica. Since almost anything is immutable, the leaks must be associated with some symbols for which definitions are accumulated but not cleared.

I will show here one rather obscure case of leaking of local Module variables, which happens when the variable is referenced by some object / symbol, external w.r.t. its scope. In such cases, such variables are not garbage-collected even after the symbols referencing them get Remove-d, in case if they get assigned DownValues, SubValues or UpValues (OwnValues are ok).

One subtle case with a memory leak

One way to ensure that this does not happen is to insert Clear[f] at the end of the outer Module, storing the result in a separate variable and returning it afterwards. There are more advanced ways to prevent such things as well. I may elaborate on those at some later time.

One common cause of memory leaks which is often ovelooked is when some local symbols make it into UI elements. The problem is that UI elements are Mathematica expressions, which do reference those symbols, and therefore, they are not garbage-collected.

Here is an example I borrowed from this thread

Now, every time when it gets executed, more memory is being leaked:

Please see my answer in the linked thread for one way out, in this particular case. Generally, this is something to watch out for.

So, one good place to start is to call

or whatever main context you are using (or other contexts, if you create symbols there), and watch for some symbols with high memory usage. In this particular case, the culprit it f$119.

Here are some utility functions which may help with monitoring symbols:

This is a memory leak in HistogramList:

You can reclaim the memory by evaluating

590
Where can I find examples of good Mathematica programming practice?
250
What are the use cases for different scoping constructs?
26
How can the opacity of a dense data set be automatically chosen?
31
What causes Module variables to leak?
8
How to fix this memory leak
9
Mathematica rule substitution memory
12
Why does this simple program leak memory?
8
AndersonDarlingTest and DistributionFitTest Leaking Memory
5
Using delayed evaluation on module variables called through an association
5
Module in numerical model for NonlinearModelFit is slow and leaks memory
See more linked questions