Suppose I have a 3d region or contour that is implicitly defined and has no explicit parameterization. This is easy to plot, as RegionPlot3D and ContourPlot3D allow implicit functions.

But now I want to be able to arbitrarily transform the (portion of the) manifold in which this plot lives, stretching and rotating it as I please along an arbitrary curve (which remains embedded in R^3), perhaps in ways that at each point depend on the parameters and values of the curve, or the implicit function, etc., and have the plot of the region or contour follow smoothly along.

In more colloquial terms, I want to be able to wrap, stretch, scale, and/or twist the entire plot of an implicitly defined region or contour along an arbitrary curve. This is of course simple enough if you can parameterize both the region/contour and curve, using transformations and ParametricPlot3D.

This concept is also similar to "sweeping" a shape or surface along a curve, except what I'm sweeping is not a surface, but the coordinate frame in which I want a plot to live. I would also like to be able to do more than sweep the frame, to wit, I would like to be able to scale and rotate the frame (perhaps depending on values of the thing being plotted, or depending on values of the curve being swept along!) as I sweep.

What is the best way to go about doing something like this?

A particular and arbitrary contour: 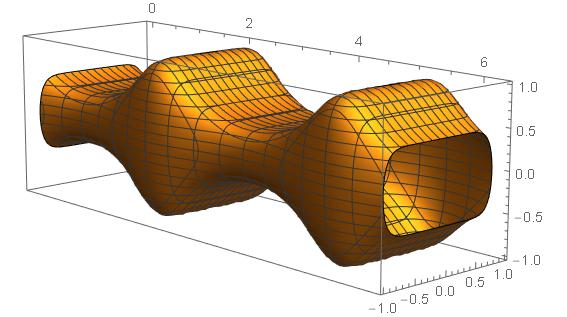 A particular and arbitrary curve: 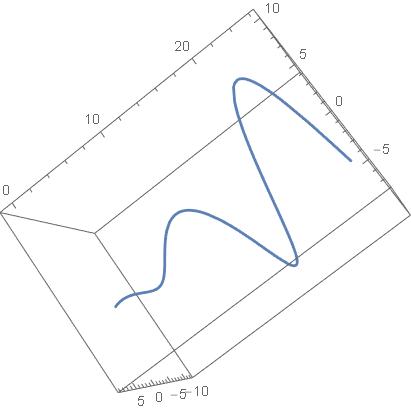 Note: Please don't try to parameterize the contour, unless perhaps it's via some approximate numerical method that works on literally any plottable contour. The example provided is arbitrary, but simple enough to tell at a glance whether a desired frame sweeping/scaling/rotation transformation is taking place. I want to do this with contours that cannot be parameterized.

NickolasNickolas
3122 bronze badges
New contributor
Nickolas is a new contributor to this site. Take care in asking for clarification, commenting, and answering. Check out our Code of Conduct.
$\endgroup$
6
|  Show 1 more comments

Browse other questions tagged plotting geometric-transform implicit or ask your own question.

3
How to find an asymptote of a logarithmic curve
8
How to combine ParametricPlot and RegionPlot?
3
Storing Variables in “Loops” and Point Plotting
5
Making a contour plot constrained to a circle sector look like a polar plot
3
Plot implicit region in 3D not working
1
ContourPlot3D in an explicit region
1
Improve performance of evaluating over an implicit region