CUDALink not working on Linux-64 and Asus GTX460

On my hardware I have a CUDA enabled video card an ASUS GTX460, yet Mathematica does not seem to recognize this.

For example, following the CUDALink Setup, I get

The NVIDIA command /opt/cuda/sdk/C/bin/linux/release/deviceQuery finds the card and reports "passed" as well as listing the card capabilities.

The relevant shell variables are set as follows:

The Wolfram linked NVIDIA CUDA GPUs lists the popular GTX 460 but has no entry at all for the GTS 460. Perhaps this is a typo in the Wolfram documentation, as it would seem unlikely that they wouldn't support a commonplace NVIDIA GPU whilst supporting a seemingly non-existent GPU. If this isn't the case - I'm clearly stuck.

Some poking around suggests that one sticking point is that

is set to $Failed.

Would anyone know where this is set? From trying to Trace CUDADriverVersion it isn't obvious to me where things go wrong.

How do I convince Mathematica that my card supports CUDA?

Try setting your shell variable to

i.e. point it to a specific library.

I have managed to get CUDALink working on an ubuntu 14.04 with an NVidia GTX 750 Ti with CUDA 7 toolkit (installed the toolkit following these instructions; http://www.r-tutor.com/gpu-computing/cuda-installation/cuda7.0-ubuntu ).

I have never been able to change NVIDIA_DRIVER_LIBRARY_PATH and CUDA_LIBRARY_PATH using env variables and get CUDALink to work.

I have a 64bit system, I ignore the lib32 libraries, I have 2 choices;

these are actually different files, I dont know what the difference is, or which is preferred, but there are only two choices, so I try the second file first and symlink like so;

With the cuda library, we find these files;

I need the 64-bit version, issue the symlink command; 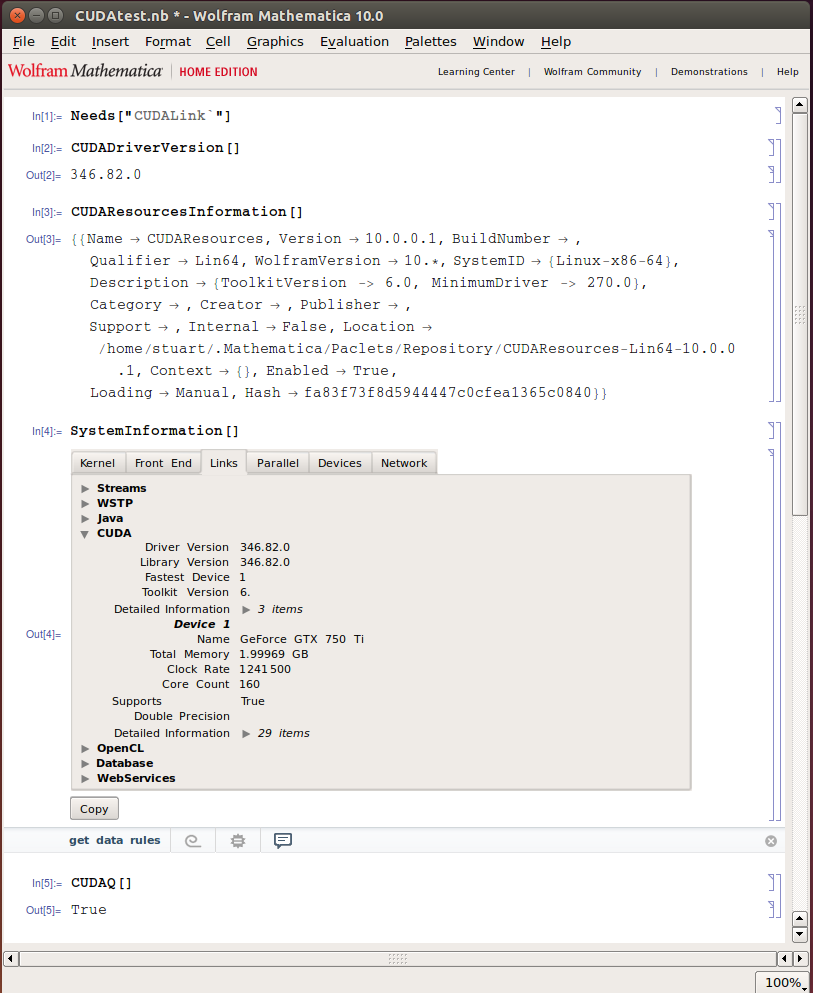 Not the answer you're looking for? Browse other questions tagged cudalink linux or ask your own question.

12
Are you able to use CUDA on Linux?
2
How to get CUDALink working on linux (Crunchbang Waldorf) with NVS 3100m

10
CUDA and GPU hardware and compatibility questions?
9
CUDALink not working on Mac OS X
7
CUDALink is not initialized
2
How to get CUDALink working on linux (Crunchbang Waldorf) with NVS 3100m
13
Anti-aliasing not working in Mathematica 10 and Linux
12
Are you able to use CUDA on Linux?
4
How to determine MMA/CUDA support for specific GPUs?
2
CUDALink and eGPU for Mac?