How to use the Testing Notebook to test a package without shadowing?

I think an important purpose of the new Testing Notebook in version 10 should be to test user packages (instead to test the builtin functions in the System context). However, what's the proper way to load a package into the testing notebook? I didn't find an example in documentation.

What I have tried is to simply load it as an input. But it doesn't seem to work. For example, I have a file test.m in the system directory, with

Then I start Mathematica, open File->New->Testing Notebook, and input the following as separate input cells:

If I evaluate each cell by hand, there is no problem. But if I quit the kernel (to start over) and then hit the run button, I sometimes got shadowing messages: testFunc::shdw. By sometimes I mean I did a few tests, each time quit the kernel and start over, and the result is either as left or right of the attached figure 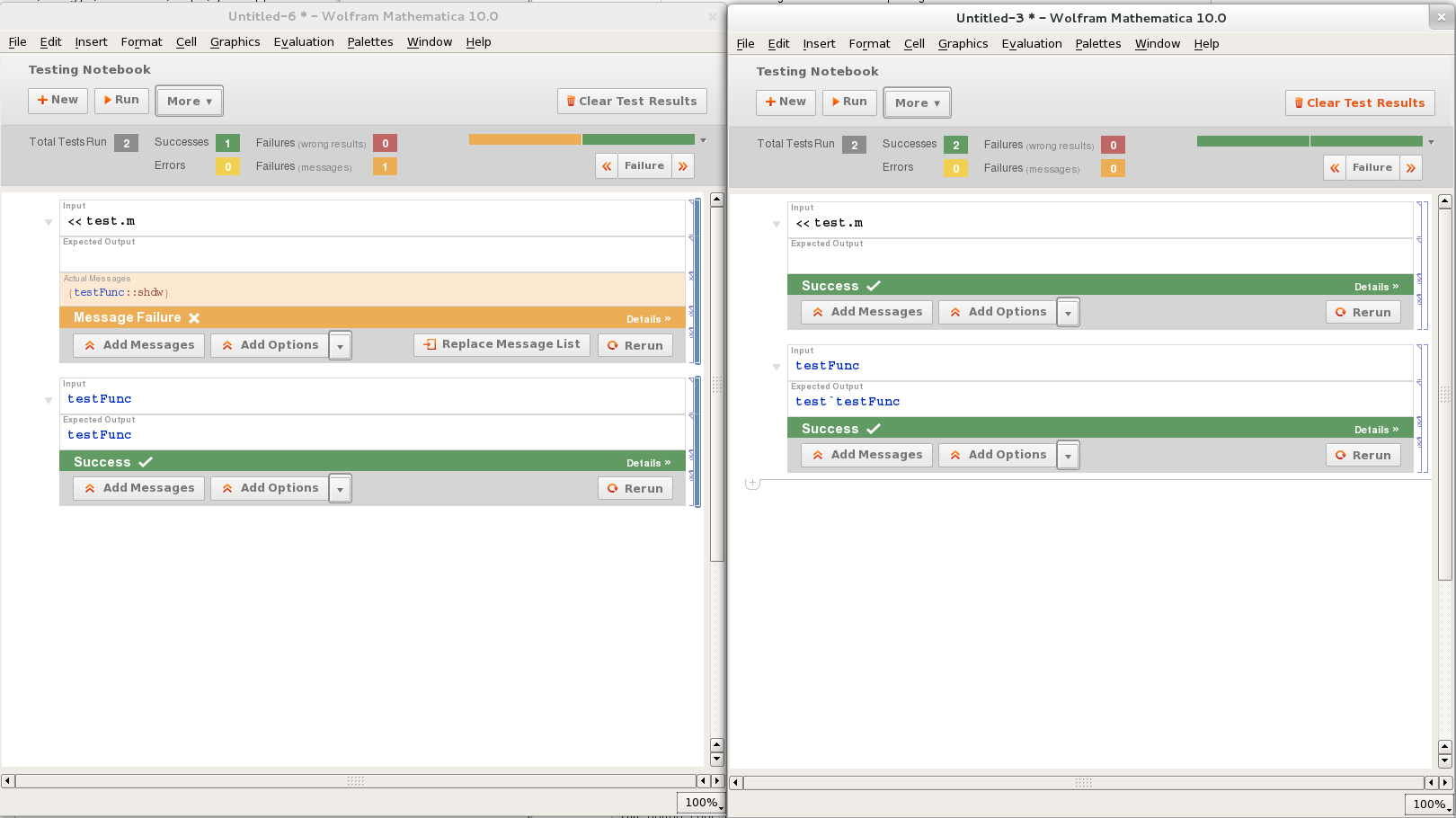 I got really confused here. Also, in the expected output of the right panel, the context becomes explicit. This is quite annoying for a long expression with a long context. I was wondering if it is normal.

From my understanding of what's going on, Mathematica does the following when you hit "Run":

Step 1 is the cause for the problem you see, because symbols are generated in the appropriate context at parse time, not when they're evaluated. In this case, the current context at parse time is Global` not test `. To see what I mean, try running the following test notebook: 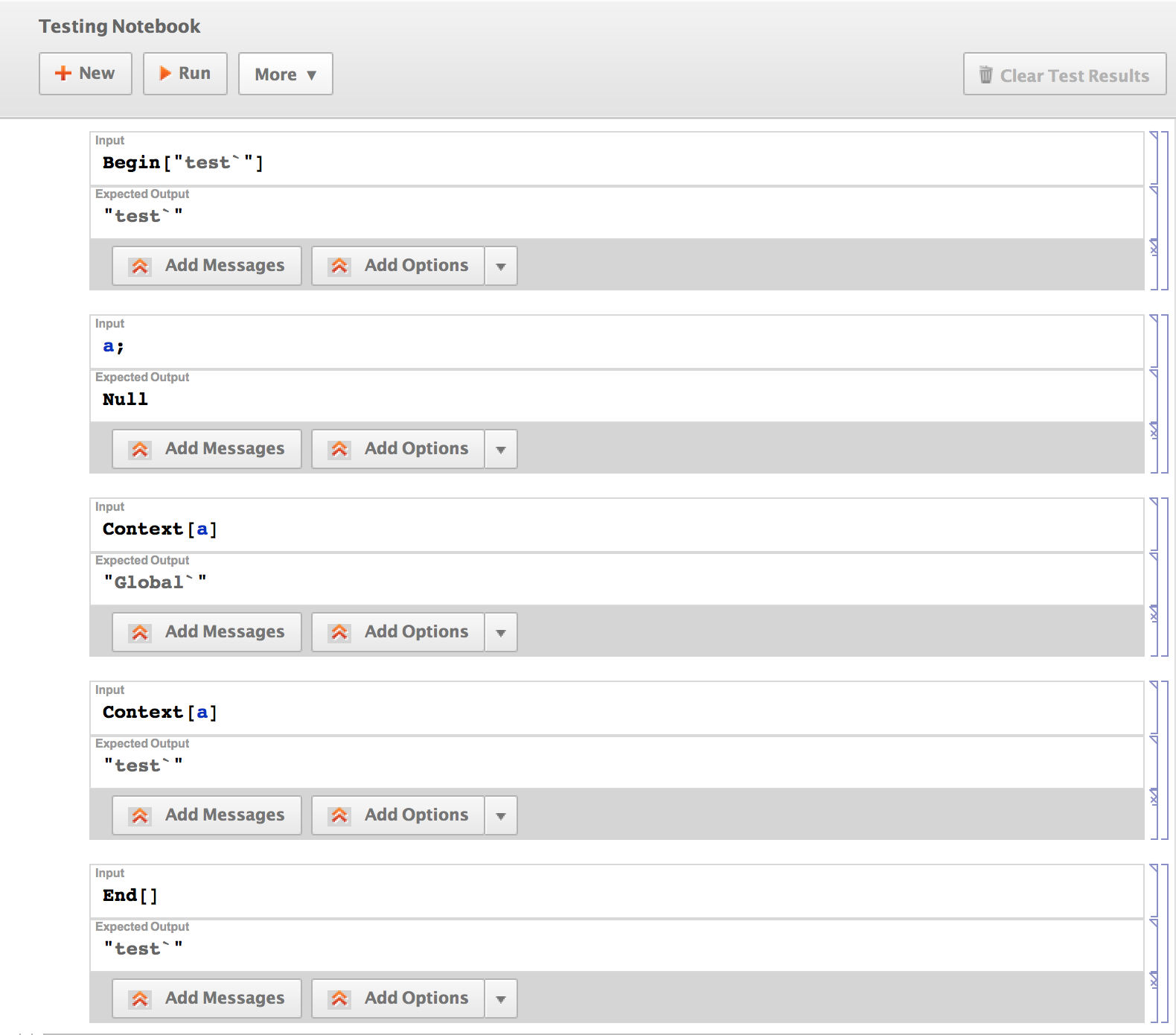 It will fail at the 4th test. As a workaround, you can do "Evaluate Notebook" instead of "Run" — trying this on the above notebook (after quitting) will fail the 3rd test, but pass the 4th as we want. A major drawback is that you don't get the test statistics and cannot quickly jump to failure points, which can be useful for large test suites.

As a matter of good practice and working within the limitations of the testing framework, I would suggest using the full context for your package symbols in the test cells so that there is no ambiguity.

What R.M. answer means is that Get as a part of the test will not help. The reason is that the content is parsed before Get is evaluated so needed contexts are not present yet.

Additionally the test is run inside Block[{$Context},...] so manual Get before hitting Run won't fix that either because Block leaves only System` and Global` visible during content parsing. 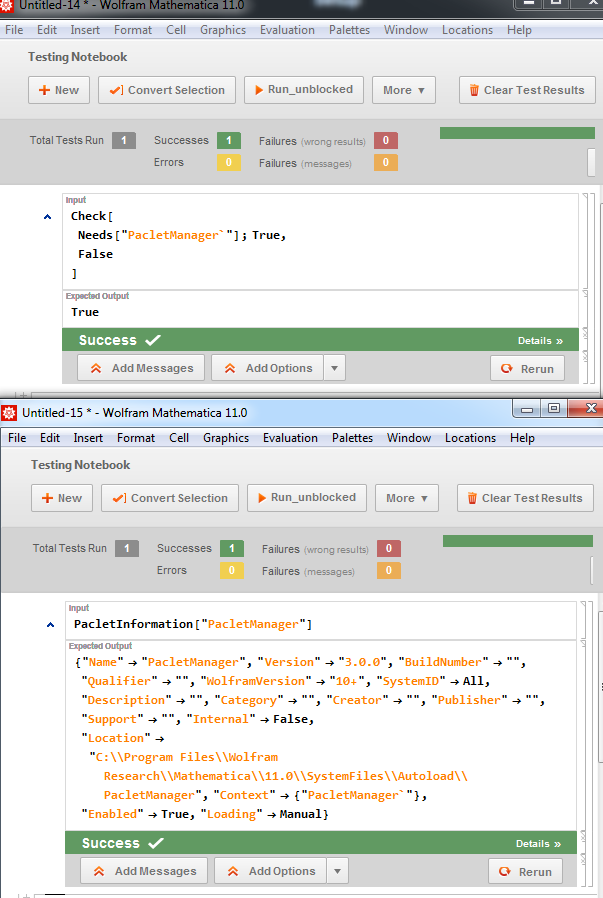 Not the answer you're looking for? Browse other questions tagged front-end notebooks version-10 guidelines testing-and-verification or ask your own question.

24
Best way to add KeyEvents and faster Quit
4
Converting a testing notebook to a notebook
11
Testing Notebook severe slowdown with newlines
6
Testing Graphics in a Testing Notebook
0
Testing notebook corrupted upon quitting kernel during Get
5
Why does the Frontend slow down in long sessions?