Message knows how to convert an expression (taken as an argument) into a string before it is spliced into an actual message:

the symbol Pi is rendered differently:

I would like to directly enter an expression into the message string so that it renders appropriately depending on where it is issued: (in the terminal -> OutputForm, or in the front end notebook -> StandardForm). temp::mystr2 = "The symbol: \!\(Pi\)"; doesn't render correctly in the front end, while temp::mystr2 = "The symbol: \[Pi]"; renders incorrectly in the terminal. Does anyone know how to do it correctly [I need a solution that works in Mathematica 8 through 11]?

First of all, you need to define what you mean by "rendering correctly", and (b) what is "a terminal". But I'm guessing your issue really has little to do with typesetting as such.

If "The symbol: \!\(Pi\)", or even the string "\[Pi]", doesn't render with the glyph of U+03C0, then your problem is the value of $CharacterEncoding is for a character set (perhaps "WindowsANSI", more formally known as Windows Code Page 1252) that doesn't include that character. So, you'll need to (i) change the value of $CharacterEncoding which does include it, say, UTF-8, (ii) use a terminal font which includes that glyph, and (iii) make sure that the character encoding of your terminal is consistent with (i) and (ii). (My understanding of the Windows console is that (ii) automatically determines (iii), though I'm hardly an expert in the Windows API. In most Unix consoles these are independent settings.)

Now, as for the symbol Pi, it has an OutputForm formatting rule which is to format as Pi rather than \[Pi] (a decision which not doubt dates to V1, when the latter would have been almost universally useless). If you want override how that appears as an argument to a message, you'll need to use $MessagePrePrint or a custom handler in the code issueing the message to tweak its appearance.

will give the same output

in both a notebook and when running a kernel in Terminal.

I don't understand what you are saying. On my system it has nothing to do with Message. Here is a Terminal window capture. 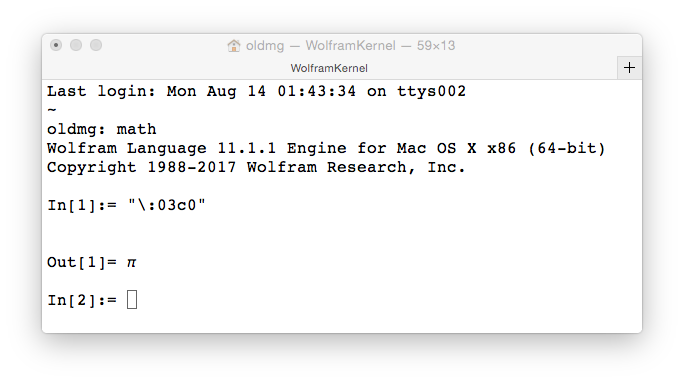 I am running OS X, so a terminal session is talking to a Mathematica kernel through Free-BSD Unix. Perhaps it is system dependent, but there seems to be no problem on a Unix-based system.

Also please note that for me "The symbol: \[Pi]" does render correctly in Terminal. 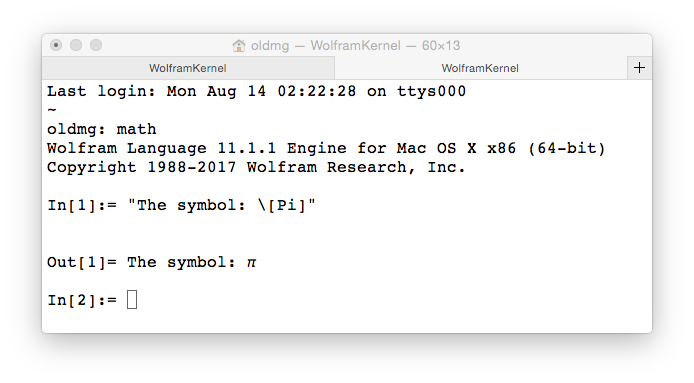 Not the answer you're looking for? Browse other questions tagged string-manipulation boxes message-coding or ask your own question.