Dealing with Repeated and Pattern at the same time

It's easy to figure out the "" pattern by the following code:

I can write another program and apply another StringCases to the second argument and get the result, but I think it's quite unnecessary:

We can know that this process has been done by the previous StringCases.(Though I don't know how to track it......Normal method using pattern/;(Echo[result];True) won't work here, the reason it explained below)

So my question is, how to get the result all in one StringCases?

Some difficulty for me

I once tried to use pattern/;(Sow[variable],True) to get pattern test's result and then process it. but as far as I know, PatternTest test each character, thus cannot be used. but Condition requires "defined" pattern with a variable name assigned to it, like a__ or a:patt, the problem of this is that when using (a:patt).. it means the result must be in the form like a,a,a,a but not patt,patt,patt,patt where patt in different place could be different. It can be easily confirmed by simply adding a tiny a: in the code:

How to solve this problem?

We can observe the whole pattern matching process of Repeated using a simpler example:

We can see that pattern matcher will match the sequence by adding characters and really know when to stop and where is a proper match, and the only thing we need to do is to find out how to let it speak it out. in this example, simply adding ? will work and return us a series of characters. Here we can know each recurrence period easily, however, in more general cases, we cannot use this type of result.

So one solution to this problem is to write a PatternTest but let it use the whole expression as input instead of character by character.

Note that patt does not correctly extract the values (for example, b->2 should be b->22). Perhaps we should consider something like this:

If the toy text is not representative of the actual data that will be processed, then the string patterns might need to be revised even further.

Is a single use of StringCases possible?

If we wish to parse the name-value pairs in a single pass through StringCases, we need to come up with something effectively like...

... except without having an upper limit on the number of pairs, and without it being so horribly verbose.

Mathematica presents numerous obstacles to this goal, most of which are noted in the question:

Given these considerations, the goal is not achievable in general.

In this particular case, if the supplied string is well-formed, then the pattern matcher need never back-track. So this opens a tiny window through which we can squeeze a heinous hack:

Most of the subpatterns in this expression are guarded by either a condition or a pattern test. These will collectively be referred to as "tests". Each test is unconventional in that it incurs a side-effect before unconditionally returning true. These side-effects are used to gather up the matched parts and slowly assemble them into the final result. In particular:

This whole process is crucially dependent upon there being no back-tracking within the pattern matcher. It may work in this particular case, but this strategy is not applicable to more complex patterns or input strings that could be considered ill-formed.

For my part, I consider this hack to be too tricky. I would recommend just accepting the fact that portions of the input string will need to be scanned at least twice in order to fully parse them. If such rescanning is impractical for the real application then I think a custom parser should be implemented.

As a completely different strategy, we could observe that the input string very much resembles HTML and process it as such:

The level range {4, Infinity} was carefully chosen to ignore the html and body elements that the parser wraps around any HTML fragments.

Here is a crude attempt at a PatternTest for phrases (sequences of characters). It is rather hacky and probably extremely fragile for the reasons given by WReach.

The syntax is phrasetest[pat, func]

A simple example - the pattern is BlankSequence[] and the test is for a string length of 3:

With multiple phrasetests you could pick out the various parts of the string and collect them with Sow. In this example I've used Echo instead: 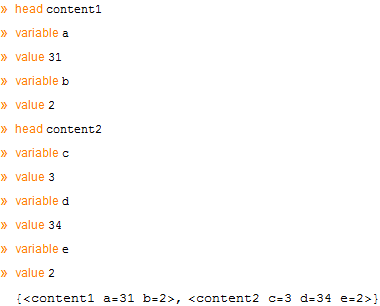 Of course the result from StringCases is wrong, you would need to use Sow/Reap and do further processing on the output. It doesn't fulfil the desire to do everything inside a single StringCases, but it does show a sort of pattern test for substrings.

Not the answer you're looking for? Browse other questions tagged list-manipulation pattern-matching string-manipulation or ask your own question.

11
Named string patterns in Alternatives, why does it depend on order?
8
An equivalent to Condition that I can use anonymously when string pattern matching
9
Can we change a pattern once we throw them into pattern matcher?
1
Weird behaviour of HoldPattern

8
How does Mathematica wrap code for front-end needs? Why does this wrapping affect the evaluation?
11
Pattern matching a pattern with patterns
6
String pattern search and replacement -- it works, but produces error messages only the first time it is called
6
Removing non-word characters in certain parts of a string
1
Dealing Repeated pattern in StringReplace
14
How to speed up pattern matching
5
Extract substring up to specific character non-inclusive
4
Subtle order-of-evaluation issues when pattern-matching with attributes
2
Reformatting the pattern inside a list