I would like a notebook evaluation to entirely stop when an Assert fails, without quitting the kernel. Is this possible (e.g., by setting $AssertFunction to ... something)?

For example, if I create a notebook containing a cell with the following lines, I would like the value of test to still be 0, and for no subsequent cells to be exectuted.

Note that setting $AssertFunction=Abort[]& does not work, because it only aborts the current computation, but afterwards evaluation continues to proceed through the notebook.

A related question: why must we execute On[Assert] before we can set $AssertFunction? Naturally I understand why we must turn assertions on and off; that is not my question. My question is why On[Assert] apparently resets $AssertFunction: 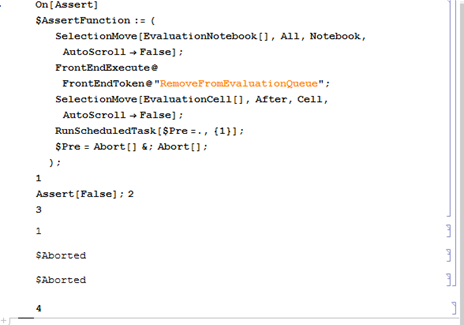 Everything from main cell after Assert is aborted and the cell with 4 is skipped from evaluation even though it was selected too.

It sounds like you want to inspect the stack when an assertion fails. Will Dialog do what you want? As in

As already mentioned however, cells queued for evaluation, and even subsequent lines in the current cell, will still execute when you Return or ExitDialog. You can ExitDialog[Unevaluated[Abort[]]] to abort a statement, but

This is such a fantastic post! One of my notebooks opens a database that is in the current directory but if I have opened a notebook in a different directory, then it fails to find the database and all subsequent evaluations are wrong. Therefore I wanted to test the directory and Abort the evaluation of all pending cells if it is wrong. But because sometimes I am on my laptop and sometimes on my desktop, only the \Documents part of the path is constant. Using this answer updated to 12.2 produces the following, which works like a charm:

Many thanks @Kuba. It could only be made better by avoiding or redirecting the production of an output cell with $Aborted for each subsequent line in the evaluation cell.

Not the answer you're looking for? Browse other questions tagged evaluation notebooks coding-style assertion or ask your own question.

2
Getting different results with `Abort` run in the documentation window vs a notebook (probably newlines)
9
Abort all evaluations via command
7
Remove cell from evaluation queue without aborting evaluation?
8
Difference between Initialization Cell and Group
3
any way to stop all the following evaluations?
4
Why does the debugger not stop when a message is generated?
2
Assert that prints message and aborts computation?
2
Use Cancel Button in a DialogInput window to Abort Evaluation or Quit the kernel entirely
2
How to abort evaluation when clicking CancelButton
0
abort the whole notebook conditionally
See more linked questions

3
Manipulate executes expressions multiple times
3
How to get Mathematica to abort the current evaluation if an assertion fails?
4
How to evaluate an expression via `LinkWrite` when the expression is only known at runtime?
2
Evaluation of a Notebook
22
Understanding evaluation and typesetting
4
Subtle order-of-evaluation issues when pattern-matching with attributes
2
How to detect when the evaluation queue is empty?
3
Stop NotebookEvaluate before the end of a notebook depending on test inside this notebook