How to find pieces of code responsible for syntax errors?

Especially: How to find the piece of code responsible for a missing parenthesis problem caused by a misplaced SuperScriptBox

For last 30 minutes (and I was lucky today, sometimes I spend 5 times as much time) I have been removing code little by little from my large one cell, (have to be one cell, it is Manipulate demo stylesheet) in order to find where the syntax error is (since Mathematica, with all its might and power, can't tell the user which line number the syntax error is located at). Each time I see the red line show up on the right side of the notebook, indicating a syntax error, I know that I will now waste another hour at least looking for the syntax error.

Why is it that hard for Mathematica to tell the user where the syntax error is?

I zoomed down to this little 5 character code, and I copy it to new notebook to examine it:

So, there is a hidden bad character there. Sometimes, with my big fingers and my small keyboard (can't find big keyboards any more, everything is so tiny), I must have hit wrong key combination, which must have injected some bad character to the notebook, and this happens.

I will keep this cell on its own in order to find what the problem is. I tried to select the cell, and do convert to input form, but nothing happened. no output came of it.

Then I did cell->ShowExpression, and this came up

So, what does all this mean? Do you see from the above what is the problem?

I think I entered the superscript as I always do, using Ctrl+^ then 2.

I think the notebook interface is powerful and allows many things not possible otherwise, but because of problems such the above, I wish sometimes I am using plain text editor like emacs, where I can see what I have and not worry about hidden things I do not see, but I tried that once, and it is not practical overall setup to work with.

Btw, originally, I had lots of code like the above inside strings, i.e. inside " " for formatting, and now I am removing all the strings to do some other way of formatting. I do not know if this has anything to do with it. But as you can see, now there is no string around the expression. Here is a screen shot of the earlier version of the notebook, from the same location of the code, showing how the above was inside a string, and I simply was removing the outside string quotes, that is all: 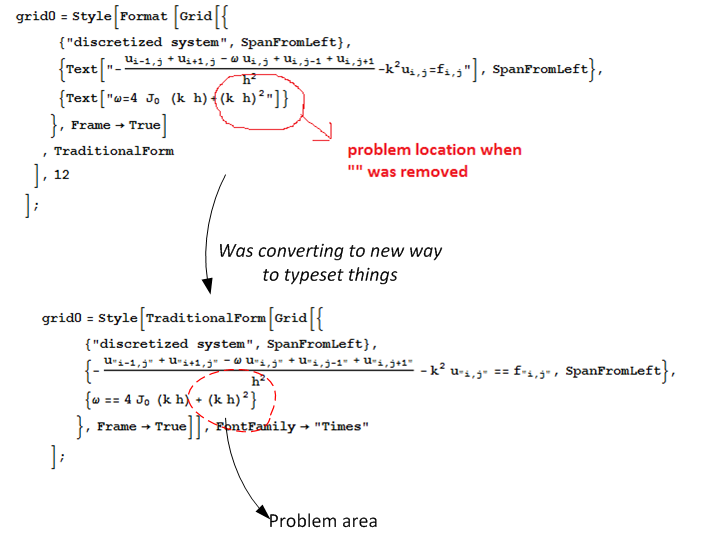 There was actually an old post on mathgroup, Strange Syntax problem, that looks like it was exactly the same problem you're experiencing. A power/superscript being associated with the closing parenthesis instead of the whole parenthesized expression (see the box forms presented in my original answer below for more details). Unfortunately, this problem was not resolved in the the mathgroup post.

to get the expanded form

This should help narrow down the problem. Note the Syntax::bktmcp warning is talking about non-matching brackets, yet in the visible expression, all brackets are properly matched. So, the problem lies in the underlying box expression.

Alternatively, if it is this particular problem, you could Show Expression, then search for the problematic code snippet SuperscriptBox[")". Then you can modify the box structure directly. This is normally easiest if you paste it into a new input cell so that the Extend Selection mechanism works.

There is no "hidden bad character" in the cell that you posted. Rather, the box structure is crazy and can't be interpreted by Mathematica - I have trouble imagining how you managed to create it...

and here is how it should look

So, your question does not really a work with the example you provided.

However, a simple way to maybe clean your code (at least in this case) is to copy it as plain text or input text, both of which produce (k h)^2 when pasted.

It happens to me quite often while working with huge notebooks. It is quite irritating because not always it is obvious what have caused an error and where to find it.

This is part of bigger code. As You see an error is transferring with Crtl+C -> Crtl+V. Usually rewritting problematic parts (if You've found them) helps but it is not convenient at all.

I have succesfully tested this method on notebook that contains ~40000 characters. It preserves notebook formatting etc.

The notebook You are trying to use it on cannot contain those orange-marked cells. Just copy the content and -> delete marked cell -> paste clipboard and save the notebook. Then it is ready for this procedure.

I'm going to show an approach to solve this issue using important remark of Simon:

and here is how it should look

However, it is not so simple to resctructure this cell, Mathematica refuses to show even BoxData of this cell, unless You Shift+Crtl+E. I'm going to use brute force of strings.

Well, not very sophisticated but it works:

It needs testing of course:

I appreciate any help with improving this pattern and method in general and with testing this as it seems to be a critical problem sometimes.

I think using control+f to find the error, after you have done "show cell expression", is easy enough. However, if we ever collect code that can automatically check for various syntax errors, this may be a nice addition.

Make a new notebook and evaluate the following

so that this is the notebook in which you have the broken cell. Make sure to leave the generated (broken) cell in it's "fancy" form. Do not use "Show Cell Expression", as this somehow makes NotebookRead unable to read the CellObject later.

Then make a new notebook, in which to put the code below.

First, let's consider some simple functions to find the cell where the error is.

Now we select all bad code in nb as follows. The code below assumes that you are not showing the cell expression of the bad cell. Otherwise you can ommit the second and third line below. The first just serves to show you what is going on.

This code looks for a very specific pattern. If you have a similar case where it does not work, please let me know.

This part of the answer is based on Kuba's answer very much. All of this is not practical yet. Again, maybe somebody can someday use it to check for multiple syntax errors programatically. But it is really an overkill for now.

Now we would like to get the string expression corresponding to the cell where the error is. Then we might be able to find out where exactly inside the cell the error is. However, getting this string is not so easy. Kuba's answer shows that we can also just replace code that causes errors by good code, but that seems a bit dangerous.

Below is a function that would tell us the position of the erroneous code in a string. You can play around with ToString on the CellObject, but the strings generated this way do not suit our purposes. Here is the function

Probably the rNWC additions do not help. I think most of time a space followed by a ")" will be made into a RowBox anyway.

Before executing the code below, make sure you have saved the notebook (nb) with bad cell in it. Also, evaluate (anywhere)

The code below will create a textFile version of that notebook in the directory where you have saved it. Unfortunately I did not see a way around copying the file here.

To find the string that corresponds the cell, we have to parse the text file. The parser I have made for this is quite alright I'd say, except that it does not consider comments. A nice feature is that cares about strings and does not consider brackets inside strings for parsing.

Now we find the brackets that are not inside strings

We are then ready to find the closing brackets of all the cells, by using the fact that when a Cell bracket closes, all but one cell bracket are matched (the cell bracket corresponding to Notebook is not matched).

With some magic numbers, we also find the starts of the cell :)

We can finally find the string

and the "position of trouble"

and the string causing the trouble

Selecting the string inside the cell

Now we select all the bad code in the broken notebook as follows. The code below assumes that you are not showing the cell expression of the bad cell. Otherwise you can ommit the second and third line below. The first just serves to show you what is going on.

Not the answer you're looking for? Browse other questions tagged notebooks or ask your own question.

487
What are the most common pitfalls awaiting new users?
22
How can I get the unchanged Box form of an arbitrary expression?
12
Adapting “Find and Replace” functionality to work with Patterns
-3
Function just gets mapped without any evaluation

9
How to see the 'source code' of DockedCells? ALT: How to 'show expression' of DockedCell?
10
Substituting confidential tagged cells by a “content removed” cell
16
How to copy code out of notebook to an external text editor without extra line feeds being added?
14
How to convert a notebook cell to a string retaining all formatting, colorization of identifiers etc?
2
Open parent cell groups of selected cell
6
How to prevent notebook from moving/reshuffling code around while one is typing?
5
How to print cell exactly at the bottom of a notebook?
4
How to preview the notebook file in a file explorer just like the preview of pdf file