Can Mathematica 10 do elliott wave calculations?

Seems like there are quite a few fibonacci / Golden Ratio type functions but nothing in the doc's or Financial implementations for Elliott Waves. I found this info online ,see here. That goes through the basics. Has anyone tried an Elliott Wave implementation in Mathematica? Here's an article describing the benefits of this type of analysis in predicting key market reversals,see here

Can Mathematica 10 do elliott wave calculations?

Has anyone tried an Elliott Wave implementation in Mathematica?

No one can speak for everyone, but I haven't. I don't know of any specific implementation.

Empirical observations, particularly of ill defined patterns don't rise to the level of explanation. Physicist David Deutsch writes extensively about this in his book, The Beginning of Infinity. You can get the gist of his analysis in his TED Talk, A New Way to Explain Explanation.

That said, Elliot Wave Theory presents one with the central problem of non-arbitrarily identifying different timescales. If one has an interest in examining timescales and the inner structure of market prices, I recommend Benoit Mandelbrot's February 1999 Scientific American article, A Multifractal Walk Down Wall Street. The following screen shots from the article give a sense of his thought: 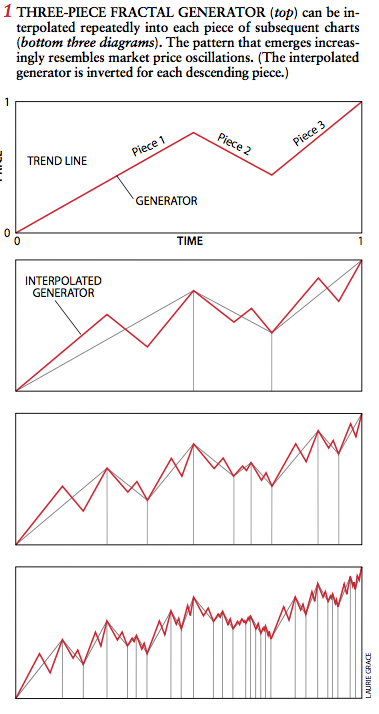 The article includes a sidebar which prompts one to Pick the Fake. 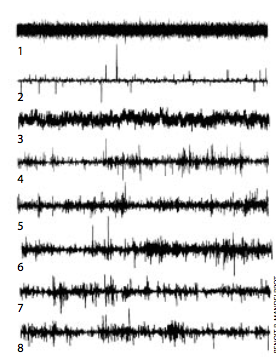 One or more of the lower five represents real market data, the others Mandelbrot generated ones.

In all of this, Mandelbrot provides a rather convincing way of fabricating artificial market data, which appears indistinguishable "in kind" from the real thing. He has other papers and a book "The (Mis)behavior of Markets" that explore and refine these ideas.

Again, while I don't personally have much use for strictly empirical investigations, (i.e., Monte Carlo simulations are dangerous to one's wealth). Mandelbrot's approach provides a way to generate objective out of sample data against which to evaluate and perhaps train trading systems.

Mandelbrot's work in this area also points to another very interesting possibility. One can reverse, his multifractal procedure to extract a series of non-arbitrary time series at different time scales.

This also captures the common trader intuition of "market time". Sometimes markets seem to move more quickly than others. This comes from some combination of order flow and volatility, but most traders have a sense of it.

One can do this in Mathematica. I have, but hold it pretty close to the vest these days. A bit of digging around this site and others on Stack Exchange will likely provide more clues.

Mandelbrot is a bit like Yoda/Jedi stuff. I just couldn't live with myself if I made it too easy.

Not the answer you're looking for? Browse other questions tagged finance or ask your own question.

1
How to simulate Multifractional Brownian Motion?

45
Learning Finance with Mathematica
10
Making a Stock Options Database in Mathematica
1
How can I connect the Interactive Brokers TWS API to Mathematica using RLink for automated trading?
3
Can not Solve FinancialDerivative for volatility
3
How can I find the Quandl codes for metals?
1
Can Mathematica plot this financial simulation?
4
Looking up Stock Symbols in Mathematica