Find the explicit solution of the integral

I want to calculate the integral:

assuming that we are familiar with the relation:

The code that I've used is the following:

But I see that substitution is not done correctly:

Edit: I wonder why I get the result:

After considering all the information I gained from following links:
Singular integral mathematica
Correct way to integrate a certain function
Bug in mathematica analytic integration?
Suspected bug in Integrate

I also wrote the following code:

seems that I can never reach the solution

Edit: I finally wrote the following code and I get the result except that I don't understand why is Global needed in my answer:

I've seen something like this before, something like Correct way to integrate a certain function or Suspected bug in Integrate perhaps, in which Cos[x - x0] and Cos[x] lead to different results in Integrate. It's worth knowing this happens and doing the translation by hand can help.

For what it's worth, here's a way to get a general antiderivative valid for over all real intervals. First note that Mathematica can find such an antiderivative for an explicit numeric integer n but not for a symbolic one.

Let's see if we can find a pattern in the antiderivatives. First find a bunch:

The all have a linear part and a sum of sines.

FindSequenceFunction can find the patterns in the coefficients. First the linear coefficient.

We'll get each piece separately, the Pochhammer in the numerator, the one in the denominator, and everything else:

Now, Sum can actually sum all these things! 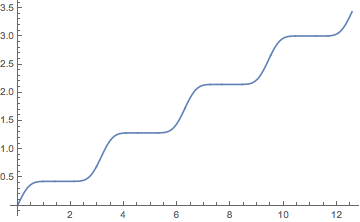 Now, I wonder if Mathematica will ever be able to do that? (Probably.)

Back to the OP's question, here's the definite integral, which again agrees with the OP's sought-after answer:

Having been very brief (and impolite, sorry for that) in my comment, due to lack of time, I'd like to show now how to proceed. The method is not automatic, but it is "man-machine-cooperation" which will lead to the result. It might be interesting despite the complete solution with Mathematica given by Michael E2, because it applies to more general situations.

The antiderivative of the integrand is given by

Plotting fA with given t0 and various values of n shows, that there are two jumps in fA at the position t = t0. The position is independent of n.

The size of the jump can be calculated thus

and from above t0

The size of one jumps is hence

Now the antiderivative is equal on both ends of the interval

And hence, by the fundamental theorem of calculus, the integral is given by j2.

" @Dr.WolfgangHintze which is true? - sepideh 21 hours ago

My answer is two times no: the theorem does not say this, and furthermore the integrand need not be continuous. This statement is also not contained in reference 1.

It is easily integrated.

This function is contiuous

Hence the fundamental theorem can be applied, giving for the integral

the expected value, equal to fI.

My answer : no, the fundamental theorem of calculus does not say that the antiderivative F(x) in Integrate[ f(x), {x,a,b} ] = F(x) should be continuous on the [a,b] interval.

It says, that it is applicable in its simple form only if the antiderivative is continuous.

I consider the formulation of the first paragraph in ref. 2 an the ref. cited in it unfortunate, to use a polite expression. It should be corrected.

I suggest that "Mister Integrate" Daniel Lichtblau checks it.

Not the answer you're looking for? Browse other questions tagged calculus-and-analysis replacement trigonometry or ask your own question.

18
Speeding up trigonometric integral
6
Using Boole to integrate over region
2
How to numerically integrate this integral?
2
Integrate solution doesn't work when values are substituted
1
Series expansion of integral
1
complex number from the integration of a real integrand