I want to solve this 2nd order ODE with two initial conditions close to the origin (one to the function and the other to its derivative) and more two similar conditions for an endpoint.

But Mathematica 10 returns the message:

My code only returns solutions when two values are fixed. Is there no way to solve this with the default method?

The aim of this problem was find a solution with these initial conditions (y'(0)=y(0)=0) that connects smoothly (preserves the slope) with an exponentially decreasing solution asymptotically, so have a finite integration in the interval with value greater that precision rzer (0.001).

I suppose that is not possible obtain a solution that satisfies all conditions imposed.

the coefficients in eq can be plotted as 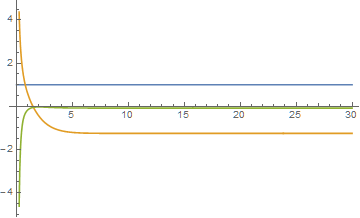 Because the coefficients become constant asymptotically, the ODE easily is solved for large r.

Because the ODE is singular at the origin, a plausible boundary condition at rzer is that suggested by the OP

With these boundary conditions, 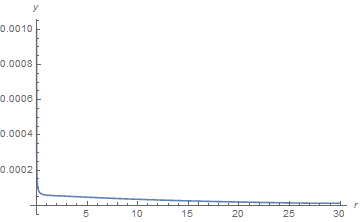 shows that not only the ODE but also its solution is singular at the origin. For that reason, it might make more sense to use

as the second boundary condition. Then, with rmax increased to 50. 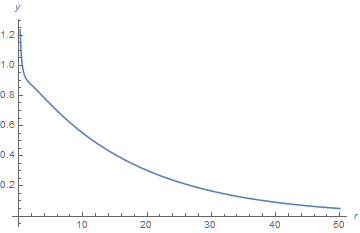 This second solution is not better than the first in this answer, just rescaled. Note that further increasing rmax requires that WorkingPrecision also be increased, which makes the computation quite slow.

Trying using the following code. You can use three boundary values, but notice the same solution if you substitute the fourth boundary involving y'[rmax]=dmax. To this end, one of the boundaries is redundant. 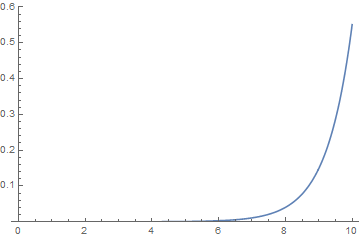 With regard to your last answer, you can consider a second region r> 10, and then just use the last boundary condition. No need to employ the shooting method:

Not the answer you're looking for? Browse other questions tagged differential-equations warning-messages or ask your own question.