I am trying to model a chemical reaction with NDSolve.

I have specified the known differential equations and parameters,

however, Mathematica can't solve it:

I don't understand the error and the related help article did not clarify it for me. How can I fix the equations?

I replaced cB[0] in the equations with cB0, since I thought the ambiguity comes from that. (Of course I also gave the corresponding value to cB0 in With's first argument.) That seems to work: 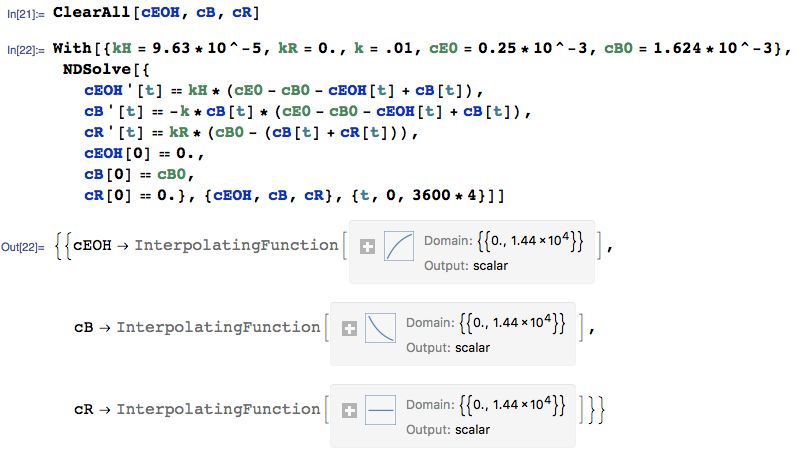 A simpler system to get the message in the question is:

I would conjecture that an explanation for it is related to DSolve finding this solution (note "cR[0]"):

This is largely because of internal representation and parsing: When the expression cB[0] is parsed, the "cB" is seen first, found on the dependent variables list, then its argument "0" is not found on the independent variables list and much hilarity ensues. The usage in specifying initial conditions is caught as a special case and must be of the form {indepVar}[{constExpr}]=={constExpr} and likewise for periodic bounadary conditions.

Or to rephrase in "comprehensible-ese" -- "the function $f$ doesn't depend on all the independent variables, so I'm going to sulk". NDSolve[] is written to assume that the domain of definition is some (multidimensional) rectangle and all dependent functions will be defined on that rectangle (or on its boundary sub-rectanges) and all uses of them must have the right variable lists.

Believe it or not, this is a good thing -- it prevents attacking the halting-problem-equivalent problem of detecting things which are really D[f[x, x], x] no matter how convolutedly they are actually expressed. (Really, partial derivatives are defined in terms of slots -- for example "the derivative of $f(\cdot,\cdot)$ as the first argument is varied" -- but that's not the notation we use, in which notation $\frac{\partial}{\partial x} f(x,x)$ is not syntactically valid.")

Sorry to ramble on... The short version is that constants should look like constants, not dependent function invocations. (This is adequately demonstrated in the other answer(s).)

OK, I solved this and it looks so stupid that I am considering deleting the question.

The solution is to replace all instances of cB[0] in the differential equations with the actual value 1.624*10^-3:

This is very counterintuitive and I don't know why it doesn't work as specified in the OP.

The general solution in this case could be to declare a separate stock variable as a "memory", e.g. make it a discrete variable (DiscreteVariables) and not change it or only change it at certain times using WhenEvent:

This works out fine.

Here we introduced another dependent variable cB0[t] which is initialized as cB0[0] == cB[0]. We have declared it to be a discrete variable and we then never change it. So cB[t] is a valid dependent variable on t which can be used meeting the requirements in the flow equations but it will only refer to cB[0] and thus behave like a constant.

Not the answer you're looking for? Browse other questions tagged differential-equations chemistry or ask your own question.

8
How do I interpret an error message from DSolve?
1
Numerically solving an ODE for a parameter
4
Solving a chemical system using NDSolve
0
DSolve Error 3D Navier Stokes (z,r,t)
3
About NDSolve with piecewise inputs
4
Modeling chemical reactions: can Mathematica tell the end result of a reaction?
0
Numerically solving an ODE depending on an unknown boundary value
2
Having trouble using WhenEvent with NDSolve