My evaluation is taking a lot of time

I was evaluating the roots of a transcendental equation, when I noticed that Mathematica never finishes but stays in the running state. The following is the code that I was using:

Note that there are a large number of roots

I thought it interesting to ask where the roots determined by Bob Hanlon and Michael E2 lie in the complex plane.

As noted in their answers, the numbers of roots are 883 and 1251. One might suppose that the first list is a subset of the second, but that is far from the case. 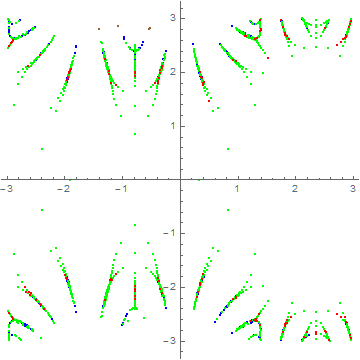 Many of the points are so close together that they are indistinguishable on the plot. The twelve roots I found are Brown. (The plot is, or should be, symmetric about the Re[z] axis.) I have high confidence that very many more points could be found with further effort, because the function given in the question oscillates extremely rapidly for larger Im[z]. 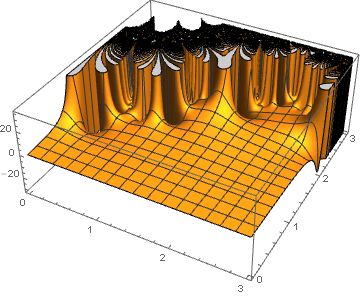 More PlotPoints would show more structure, although the plot soon would become unintelligible.

One of the forty to fifty sets of roots visible in the first figure lies precisely at Re[z] -> -Pi/4, which allows us to take a closer look at it. The original expression in the question can be rewritten as

Correspondingly, this expression for the set of roots under discussion can be written as

Conveniently, this expression is purely real, factors, and only the last factor oscillates. 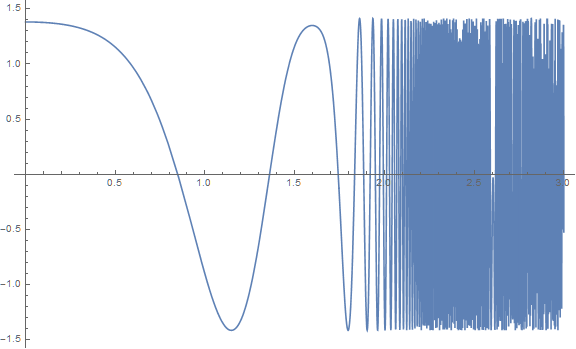 This oscillatory function can be simplified by

Consequently, roots are located at integer values of 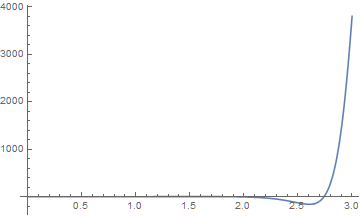 Most of the roots evidently are located in the range {y, 2.7, 3.0} A count of the roots can be obtained from the phase function at its first maximum, first minimum, and at y -> 3.

From these values the number of roots can be estimated as 4129. If the other sets have comparable numbers of roots, the total probably is of order 200000.

Solve::incs: Warning: Solve was unable to prove that the solution set found is complete. >>

Maybe there are more, too. The timing is almost 6 times as long as BobHanlon's NSolve command on my computer. But the solutions are exact, so paying some price might be expected. Here is the first one:

See How do I work with Root objects?, if you are unfamiliar with Root.

Not the answer you're looking for? Browse other questions tagged equation-solving performance-tuning numerics complex or ask your own question.

80
Updating Wagon's FindAllCrossings2D[] function
46
How do I work with Root objects?