I am trying to create an animation with a graphic of an arm that can bend at the elbow. For this purpose I created the following two images: hand1 and hand2. I load the images with

where instead of ... I put the proper path to the files. Next, since I want to have a handle on the position of each image within a frame of a certain size, I Inset the images into Graphics objects:

Now, if I try to Show one picture on top of the other, I see that the Graphics objects give a color artifact at the boundary where the two images overlap:

Here I have zoomed in and made a screenshot of the problematic region: 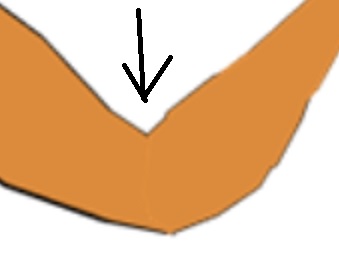 (the black arrow points towards the "intersection region" where the artifact appears in the form of a line of slightly lighter color than the usual background. The same lightening of color also appears at all other edges. You might have to tilt your screen up a bit to see it clearly.) On the other hand, if I directly overlap the two imported images, this artifact does not show up: 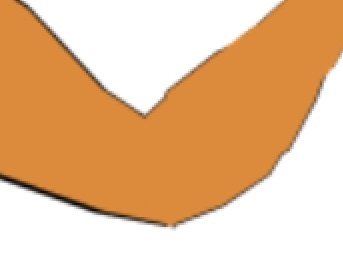 I really would like to use the Graphics wrapper, since it allows to change the image coordinates within the frame, but the artifact above is annoying and basically a deal breaker. What should I do to get rid of this artifact? Maybe there is an other function that can display images and offers access to display coordinates? Thanks for any suggestion.

It turned out that for some reason the image got re-sized to a slightly different pixel width and height. Fixing the width explicitly to the original value removed the artifacts:

Not the answer you're looking for? Browse other questions tagged graphics image-processing or ask your own question.

27
Programmatically combine 2D contour plots with 1D projections
6
How to add a graphics frame to an image without resampling
6
Strange opacity behavior
4
Rotate imported images which are inset into a Graphics container and then overlapped?
8
How to apply GradientFilter locally to an image?
1
Adding a second color bar to a plot
0
How to overlay and scale a Plot onto an image of another plot
2
ImageForwardTransformation always puts origin at lower left