I tried Solve but it seems to work infinite time.

my input in mathematica

another question rises when I try to solve the same equation but when $x,y$ not given, but I have some restrictions that give me more equations. What I trying to do: I have points $u,v$ (distorted points) and I don't have original points $x,y$ but I can foto the same segment in different places and I know that distance $dx=x_{2}-x_{1}$ and $dy=y_{2}-y_{1}$ is always the same,so I want to reconstruct perspective transform that I don't know.

my input in mathematica

but Mathematica give me {} just trivial solution.what is wrong?

maybe it's possible to automatically rewrite system of equations as linear system $AX=B$ ?

stating the problem as a system of linear equations

seems to work. On a sidenote, it might be interesting to know, that for doing projective transformations Mathematica supplies the LinearFractionalTransform function. So you could state your transformation like this:

, get the system of equations

Regarding your second question i want to show a more practically relevant example that should give you a general idea on how you could approach problems like this. Let's say we have a bunch of points in a regular cartesian grid

that got transformed by an unknown projective transformation

and now we ask the question: What does the transformation look like, that did this projection?

For answering this question our plan is the following: First we create the system of linear equations that determine the projection matrix elements that transform our specific points from xy- to uv-space.

Now we want a way to guess the most probable transformation matrix given the points before and after the transformation. Since we might measure more than the 4 points necessary to uniquely determine the transform, we'll do a general least squares fit that determines the matrix elements which give us the best result averaged over all points.

Now we can guess both the forward and inverse transformation

and use it to recover the original grid from the measured points (or other points that we might be interested in). 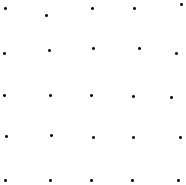 For your specific problem, where you have the same points in xy-space seen from different perspectives, you can take a similar approach, but in your case the unknowns are not the transformation matrix elements but the coordinates of the points in xy-space, so you would have to adapt the code accordingly (you could take GuessProjection as a guideline). Also instead of giving extra constraints in terms of differences dx, dy, ... you could arbitrarily designate one point as the (0, 0)-point in xy-space and let the LeastSquares-routine figure out the rest.