I am a newbie to Mathematica so this question might looks silly.

I want to generate a smooth kernel distribution graph for this set of data. The data I uploaded has two columns, the first column is the price of a specific day, and the second column is the weighted volume (which I calculated myself in excel using the volume of that specific price divided by total volumn,if anyone wants to view the raw data, can be found here). So these two columns of data comes with pairs, and I want to do a kernel density estimation for the first column of variables, using the second column as analytic weights.

By following the"SmoothKernelDistribution" documentation(I don't have enough reputation to post another link here), here is my code:

Instead of generating a graph with curves, it is end up with showing only x-axis and y-axis with no curves.

I could generate pretty good graph by using Stata and gnuplot with this set of data, so I think the format of data was OK.

Is there anybody could point out what I did wrong with my codes? Thanks.

I just realized by using the data I provided beforehand, there isn't much differences if the second weighted column were taked into consideration or not. However, for other data, the differences are huge and fundamental. Such as using this set of data,the differences between the answer provided by Lou and the graph generated by Stata(which I used the second column as weights), could be huge: https://www.dropbox.com/s/wt7j3ku6ha9wuhb/66xlsx.png?dl=0

Anyone could provide some further help? Thanks.

Since the data consists of pairs of values, the distribution given by SmoothKernelDistribution[data] is for a bivariate distribution. 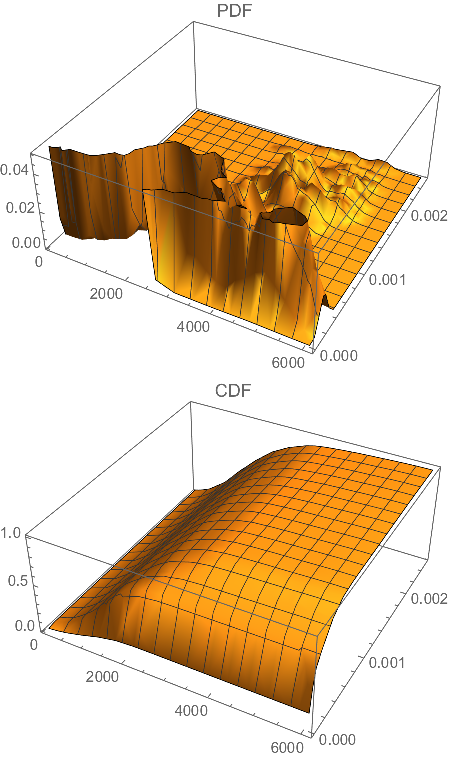 You can even read the following How to | Import a Spreadsheet

How to | Import a Spreadsheet

The spreadsheet is included in the Wolfram Language documentation folder ExampleData:

Not the answer you're looking for? Browse other questions tagged plotting import distributions or ask your own question.

2
Creating a data1 versus data2 plot?
3
How to combine two plots with the same y-axis
0
Plot financial data: timestamp + value
0
Loading and Plotting data
4
Import data from Excel and plot in Mathematica
1
How to plot a line density plot using data file
2
How to get a 2D Plot from a 3D Listplot?