Here's the situation in my Mathematica Notebook:

I'd like the bottom cell to be grouped with the cells above it. Here are those same cells toggled into code:

Let me clarify what I'm trying to achieve:

Following the solution of @PatrickStevens changes nothing unless I switch to Automatic change grouping to grouping in the Cell dropdown menu. However, doing this breaks other cell groups that I created manually:

So how can I set a notebook to automatically obey these grouping rules:

Following the solution of @PatrickStevens changes nothing unless I switch to Automatic change grouping to grouping in the Cell dropdown menu. However, doing this breaks other cell groups that I created manually

Possible values of the option CellGroupingRules are mostly undocumented. You can find them via the Options Inspector: 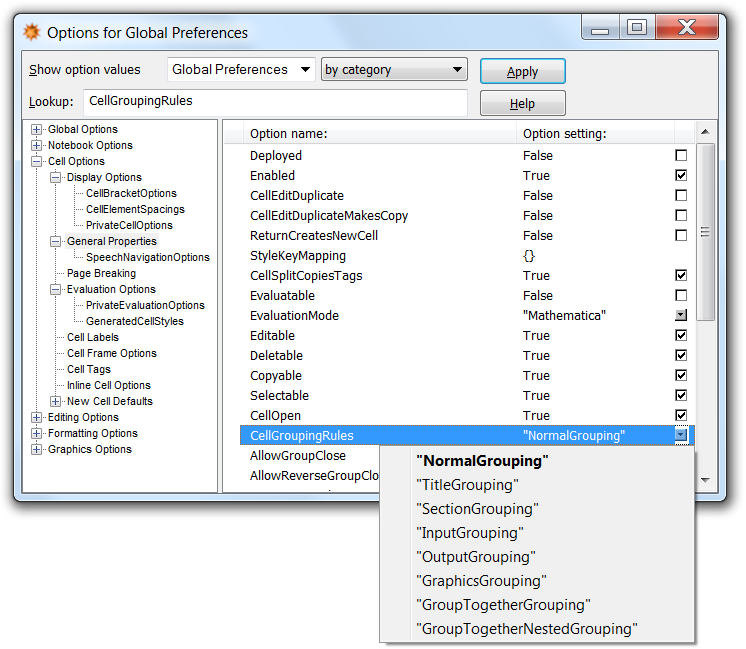 In this 2000 year MathGroup post P.J. Hinton from Wolfram Research provided some explanations:

You can change the cell grouping precedences as defined in the notebook's style sheet. This will give you the means of directing the front end to use your preferences as "automatic grouping".

The decision as to whether a collection of cells will be grouped under a single bracket is determined by the option setting CellGroupingRules that resides within the style definition used by the cell. Option values take the form

In general, if adjacent cells have styles which use the same grouping rule name, the cells will be grouped only if the preceding cell has a higher precedence level. Consider the placement of these two cells together.

Things get a little more complicated when cells of unlike grouping rules begin to appear next to one another. The rules here are:

1) "TitleGrouping" groups with any other cell that appears below it.

2) "SectionGrouping" groups with any other cell that appears below it with the exception of those cells which have "Title" grouping.

Finally, if a pair of cells group together, but a third, preceding cell does not group with the first cell in the pair, then the pair will for its own cell subgroup.

In this 2007 year MathGroup post one of the users summarized own findings on the subject. These findings are obviously incomplete and partially incorrect but since there is a lack of such information I'll cite them here:

Here is what I have managed to infer so far (no guarantees that I got it right, as these features are unfortunately undocumented).

CellGroupingRules can be one of the following:

"NormalGrouping" → Appears to be essentially no grouping

"InputGrouping" → Group with cell below if it has style "Output", otherwise no grouping

"OutputGrouping" → Group with cell above if it has style "Input" or "Output". (By implication, will group will cell below if cell below has Style "Output")

"GraphicsGrouping" → I think this is now legacy as graphics have style "Output" in version 6. Presumably still used if you turn on legacy graphics.

"GroupTogetherGrouping" → This is new to version 6, and I am not sure how it works yet and whether or not it needs an _Integer like "TitleGrouping" and "SectionGrouping".

"GroupTogetherNestedGrouping" → Also new to version 6. Also not sure how it works.

I would be interested in hearing what others have inferred, or if they have any other ideas on how to achieve printing "without the code".

Also citing this answer, "GroupTogetherNestedGrouping" is intended "to stay in the same grouping space as list stuff normally resides (look into the Default stylesheet at "Styles for Body Text > Display > Lists > Bulleted")".

You're not using CellGroupingRules correctly. It groups by the number you provide it. Change 1001. to 10000. and it works.

11
Mathematica 12 Frontend for Mac: cell grouping messed up upon copy/paste
10
Making cells group
19
Any manual on cell grouping management?
7
How to group cell type A under cell type B?
8
Is it possible to Print into a collapsible CellGroup?
1
Table of sections with CellPrint

10
Making cells group
8
how to select all cells with specific property such as the ones that are closed
7
How to group cell type A under cell type B?
2
How to select Input|Output Cell Groups in the Notebook?
0
How does one use option CellGroupingRules?
0
How to restore broken Automatic cell grouping behavior?
0
Nested groups of cells