When computing the series expansion of a Root object, Mathematica throws an error like: "Because of branch cuts, the series may represent a different root of [root expression] for some values of [expansion parameter]". However, I always compare the results I get with the "exact" numerical result and it always, within a certain region, yields a good approximation.

Could somebody maybe show me a simple example of a Root-object, series expanded around a point x, where due to branch cuts, the result is actually not good. If I misunderstand this completely, please explain, what is meant by this warning, and what Mathematica is actually trying to warn me about.

I don't know what the "simplest" example would be, but here is one: 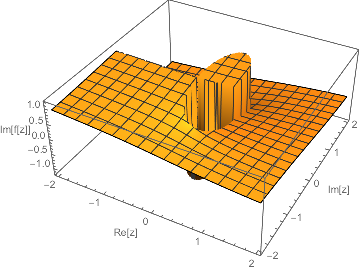 Here you see two regions near the origin that are bounded by discontinuities of the imaginary part (branch cuts). In these regions, a Series expansion will converge only within a radius that doesn't intersect the boundaries. To test this, do the expansion about points in both regions. Here, you will get the warnings mentioned in the question both times:

Now compare if all three functions are almost the same at a single point:

The first result is the original function, and clearly only one of the Series expansions (f2) is valid at the point z == .2 - I .004. That's because it was centered in the region where that point lies.

The other expansion, f1, is off by a large amount even though it was done around a point z == .2 + I .004 that is just on the opposite side of the branch cut along the real axis by a tiny amount.

Not the answer you're looking for? Browse other questions tagged equation-solving series-expansion or ask your own question.

3
Series expression of a Root object
6
Successive Series Expansion Bug (?)
4
How to Approximate at Non-differentiable Point (forced Series Expansion around Branch Cut)
0
Series can not expand the following root object about infinity. Is there another way to expand it?