How does one define a function that takes vectors as arguments but also derivatives?

tldr; I just want to implement a version of the following mathematics function:

in mathematica, and be able to take derivatives of it in a correct manner and supply list of coefficients (and $t$'s) to it so that it evaluates it correctly.

I was trying to create a function, that took as an input a vector and given that vector performed operations on it. In particular I wanted to give a vector to specify the exact coefficients to evaluate for a linear combination of decaying exponential functions as in:

the first issue that I had was that when I defined the above, it immediately threw me warnings:

this seams counter intuitive to me because, in other languages, if the indices depend on length of the object...it doesn't actually throw the error messages until run time. Is it possible to stop mathematica from throwing me obvious error messages? Or am I defining my function incorrectly?

Furthermore, something that I also noticed is that I might not be aware what the difference between the following two:

is. For example, when I define the version of the function f I gave above with both c[i] and c[[i]] they behave differently and I sort of understand the difference but I can't get the functionality I want, which is be able to give lists as inputs AND also take derivatives freely as I wish. For example if I define:

then I am able to take derivatives of the above expression freely and correctly as it should:

however, if I try to give it a list of coefficients it tries to evaluate the vector :/

which clearly doesn't make sense (what does it even mean to evaluate a vector/list anyway :/ ). 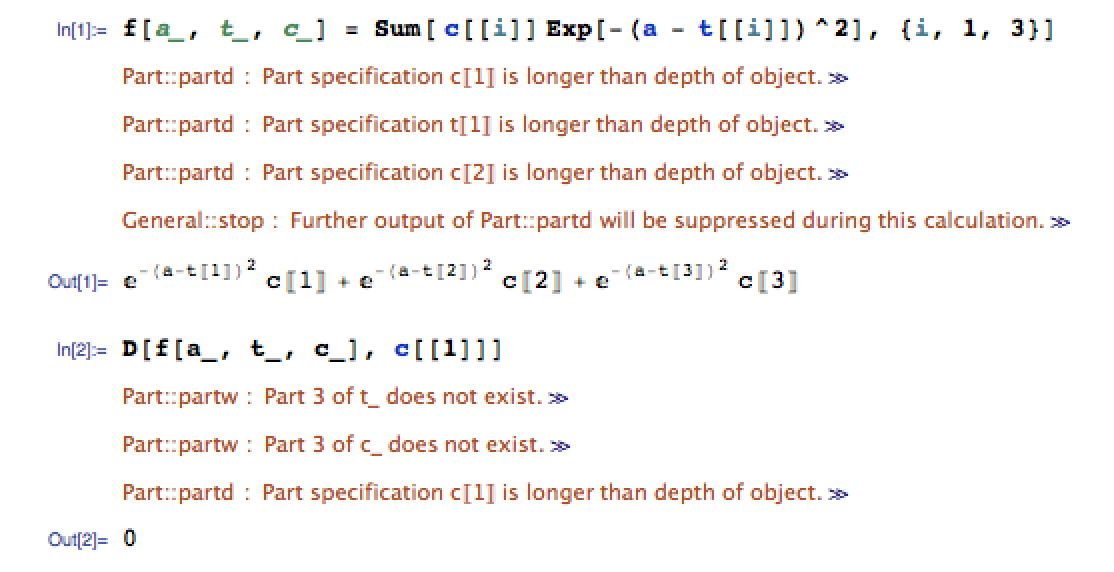 So basically, I concluded that even though I've done research to find what the different brackets mean, I don't quite understand this behaviour of mathematica. As far as I understand c[i] means to evaluate the function c with input i and f[[i]] means "indexing" using the Part function. Though, thats all I know and can't connect what the issue is.

Can someone explain to me how I can create a function that takes vectors of coefficients but also takes derivatives with respect to its variables in a normal way?

Here is some food for thought

f can be used as a numerical function or to generate symbolic expressions. The clause /; Length @ t == Length @ c enforces the constraint that the vectors t and c must have the same length.

This may leave you wondering how to generate lists of variables. This has been asked before and is answered here.

Another thing to look at is the difference between = and :=. For example, if you define your first function as

then you get no warnings and you can evaluate

as you wish. You can also take derivatives

Not the answer you're looking for? Browse other questions tagged functions calculus-and-analysis vector or ask your own question.

462
What are the most common pitfalls awaiting new users?
8
Generating a vector of dummy variables
1
Simplifying results of a vector function to be nested (SECOND UPDATE)

3
How to substitute numeric values in a symbolic Jacobian matrix?
2
Directional derivative of SiegelTheta
2
How does one verify the derivative of $ f(x) = \sum^{K_2}_{k_2=1} c_{k_2} \exp\left(- \big(a^{(2)} - t^{(2)}_{k_2}\big)^2\right)$
1
Defining functions as derivatives
1
Series — one assumption works but a slight variation does not
2
Partial derivative: Understanding output
0
Create and manipulate list with variable length?