Accessing parts of an Association can be done either using Part or the [] extraction notation. Although similar, there are subtle differences and I'm wondering if (immutable) key removal is part of that subtlety or set to be updated. For example, changing a key value is similar

but removing a key-value is apparently not since while

While perhaps appearing as peripheral language design issue, I think clarifying the varieties of in-place, L-assignment further illuminates the much more consequential notion of mutability/immutability within the WL.

My conclusion is that yes the difference noted between [] and [[]] assignments (both in Unset and more generally) is somewhat incoherent with the current [] implementation representing the most consistent, in-place interpretation. Accordingly, extending this interpretation to all other varieties would add coherency (A "bug" label where in-place assignment doesn't align with []'s idiom however, doesn't seem warranted so I'll instead label such deviations, a "mite").

Let's start with Lists by way of background:

As pointed out by Leonid Shifron in the question comments, Set is being used in two subtly different ways here; in the first instance a variable is being created; in the second instance a part is being modified. While not keeping these usages separate lies behind subsequent differences (in this periphery at least), IMO an overriding imperative here is pedagogy; the use of Set and its infix form "=" is so ingrained, its application so universal, that the described dual usage is both natural and an integral part of Mathematica's learning curve. Further, existing coherency levels bear enhancement as to be outlined.

Firstly note that the creative usage of Set affects WL's evaluation sequence in addition to (or as part of) defining a new structure:

but as Set giveth, Unset taketh

This Unsetusage at a global or "whole structure" level can be viewed as both undoing Set's actions or else removing a structure. In the latter case, given Set's dual usage, coherency posits that a similar part removal should also be available - in other words can one taketh away part of a structure using this syntax? Alas and unfortunately, for List's the answer is no (although the situation is different with Associations as we will soon see)

but I regard this as another "mite". I maintain that it is perfectly reasonable and natural to expect that instead {a,c} be returned given ls[[2]]=.'s removal semantics. Conceptually I don't see too great a distance between removing a whole structure from a namespace and removing a part (while recognizing that the former is also accompanied with the removal of a rule). We can view these operations through the lens of a coherency matrix where we observe that the outstanding action not yet considered is the creative action of Set on parts (an implementation of which ensures that UnSet consistently undo's Set's actions).

could instead return {a,b,c,d} (which, that it doesn't, I regard as another "mite").

When it comes to Associations however, all the coherency just described is nicely implemented as we can observe by stepping through each cell in the coherency matrix. 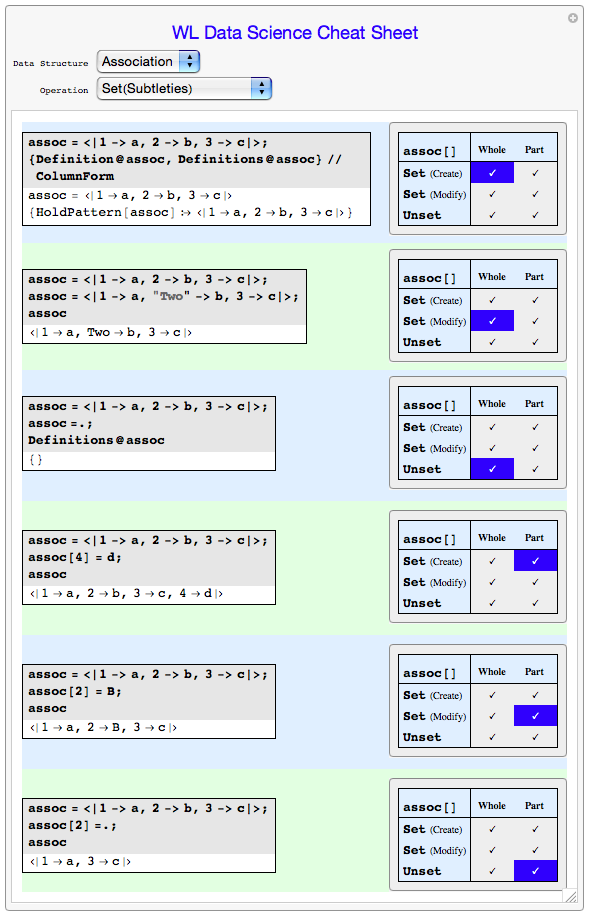 IMO, a gain in coherency would result from squishing all outstanding mites by extending []'s Set semantics to ls[[]], assoc[[]] and dataset[].

Note that in relation to creative part applications of Set, previous examples relied on the part extending the structure "continuously". Discontinuous part creations require the insertion of missing elements semantics for which are already provided by Missing[] and SparseArrays. For example,

Currently, this insertion does not occur even for assoc[] since while

We return to the connection between immutability and mutability. This exposition and suggested unification of Set's semantics, is by no means intended to emphasise or promote it as the dominant or even preferred method for the frequent changing of data structures. Set is ideal for beginners, for initiating structures, for changing single elements in the simple immutable fashion and finally for recording chains of changes. There are, of course, more flexible functions for handling richer mutations. For example, Set can't readily handle changes that involve a function of the part's value as provided by MapAt.

nor can it, for example, singly handle multiple modifications in the manner of ReplacePart

Finally, Set doesn't enjoy the ready compositions via operator forms within a Query

Not only are these richer modifications but they are also done so mutably with the base definition of assoc remaining unaffected. This is a powerful and important feature of the WL that is, IMO, essential to encouraging and facilitating seamless experimentation. In fact, as touched on elsewhere the interplay between mutable/immutable structures captures scientific practice and even the unfolding of evolution. More locally, much of Mathematica's prototyping ability IMO stems from WL's mutable nature but structures eventually need augmentation to record finds, a fact that I think explains recurring questions on immutable modifications. Currently, a whole/global Set is required

Eventually repeated application of this construction starts to invoke "boilerplateness". For some users it may also be a little disconcerting minimally changing a large legacy data structure by apparently, expensively copying the entire structure (a misconception not perhaps easily disabused for those less versed in mutable/immutable distinctions). But is there a more natural, infix approach to immutable assignment? I think so. We can take our cue from AddTo or TimesBy, a+=1 or b*=2 whereby the content immediately wrapping the = defines an operator set to operate on the data structure defined by the first symbol.

IMO, the relevant, "infix operator" begging for a call to action here is "@="; behold the "naturalness" of the following:

Its generality can be seen how existing idioms get covered

or in an answer to dataset in-place assignment

or by "rendering redundant" existing immutable variants such as AppendTo,PrependTo, KeyDropFrom (while reducing the need for future variants )

This is yet another example of the power of operator forms. Note that in these immutable versions there is usually a sense of one large, legacy structure, being augmented by adding/changing a single element. Hence operator forms, which require a natural target structure to operate on, naturally emerge by considering the original structure as constituting such a target. Other functions, such as Join, on the other hand, have traditionally considered joinable elements to have equal prominence so that without an obvious target no such operator form emerges. The notion of an immutable, infix assignment alters this whereby the following becomes more natural:

Currently there does not exist such an infix operator, @=, and while it could be introduced by the Notation utility, general package development doesn't gel with such integration; we can however, currently implement it by instead borrowing an existing, if mildly related, infix operator, \[DotEqual]

whose visual sense is better provided by an actual visual

For Join/StringJoin, operator forms need defining (since as mentioned, in this idiom's absence, no target operand presents) and not wanting to tinker with core, native definitions we can instead create o operator forms when these are not built-in 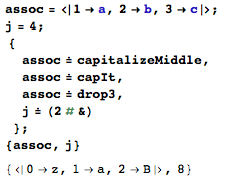 68
V10's Operator Forms - what are they good for?
52
Changing Values in an Association using Map
39
Error changing Dataset using Part
33
How to organically merge nested associations?
27
How can a key be renamed in an Association?
21
Should I always be using Module in functions unless I explicitly want global variables?
6
Shorter shorthand for StringJoin[]?
8
Is Package development (via InitializationCells) compatible with creating new Notations (via MakeExpressions)?

83
Why round to even integers?
16
Why doesn't Mathematica pack Boolean arrays?
18
Why does Mathematica order polynomial forms in reverse from traditional order?
5
Casting Dataset internal type from Assoc to Struct
8
Set PlotTheme globally?
14
Association's Key[key] extraction different in V10.1/V10.2
11
Problem with Clear[assoc] as a value in an Association
20
Integrate - Why is the integration variable not local
3
Refactoring: Why? When? How?
3
Adding together values from different association lists