LineLegend behaves differently in ListPlot in Mathematica Version10.0 or later

Suppose I want a line legend for a list plot:

However, the output doesn't show a line legend but something that looks like a point legend:

I think that this is not a bug, see addendum.

The syntax you used, i.e. LineLegend[{"label1", "label2", ...}] causes the legend to inherit the style from the plot, which means Joined -> False. You can fix this by specifying the option manually.

If you use PointLegend instead, it will do the same thing. The only important factor is the values of the Joined option.

If you use these legends outside of the PlotLegends option of some type of plot, they will not inherit any options and will behave as their name would suggest (and as determined by their default options).

Should we consider this behaviour change a breakage in v10? I don't think so because the v9 behaviour also causes problems. In v9, ListPlot[Transpose@{Range@40, dat}, PlotLegends -> {"label"}, Joined -> True] uses a point legend, even though the plot has a line. This seems to have been fixed in v10 by causing the legend to inherit the Joined option from the parent. 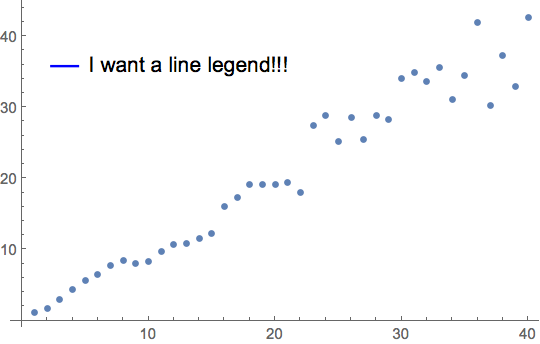 3
Mathematica - Dynamic - ListPlot - baseline
3
How to plot a log log plot of the error
9
Legends in combined Plot and ListPlot
8
How does PlotLegends actually work with ListPlot3D?
8
Ticks disappear in Graphics3D with Epilog
1
Show linear plot as log plot
1
How to add an additional legend that shows the dashing one is using?
0
How to use “Style” properly with “ListPointPlot3D”?