Ask Question
Asked 5 years ago
Active 5 years ago
Viewed 250 times
5
$\begingroup$
Closed. This question is off-topic. It is not currently accepting answers.

Trying out the new Databin product in the Wolfram Cloud.

I have a simple ,-delimited .csv file with a header row which I have imported using the follwing:

I would now like to export/write this dataset to the Databin.

However I get the following error:

Export:chtype: First argument Databin[...] is not a valid file specification.

Databin:apperr: An API must be specified.

Any suggestions on how to export/write a dataset to a databin in a short/direct way?

This is to share the outcome of a follow-up investigation on the topic.

Dislaimer: Wolfram's DataDrop and with it the Databin command as part of the Wolfram Language are being pushed as extensions of Mathematica. Hence the posting in this forum.

the issues I have encountered where with

The code which worked in principle after fixing the file:

The for loop was inserted to ensure that the size limit on Databin items (25kb by default) is not exceeded.

Additional points to note though on the loading of the Dataset subsequently into the Databin. The DataDrop platform enforces ingestion and compute ceilings which you may need to take note of when attempting to load 'lots' of data in relatively short time. 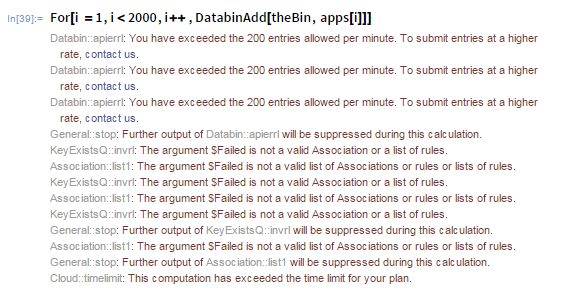 I hope this additional info is useful for future readers of this page. The question as such though should be closed.

Browse other questions tagged export dataset wolfram-cloud or ask your own question.

5
Databin questions
1
How to change the Databin file name?
2
Converting CSV data to a Dataset
2
Alternative to Databin
0
Truncation of Labels and Data when visualized as Dataset
1
Export DataSet as CSV or XLS
5
Convert Matrix into a long form Dataset
5
How to export a Dataset to JSON or CSV?