Note: In order to reproduce the bug, the symbol Dataset may need to be evaluated (to load its definitions) before defining toDataset.

My little function, from pre-10.2 ,to turn a headed table into a Dataset.

In 10.2, ??toDataset shows something very odd indeed (after a big barf of messages). 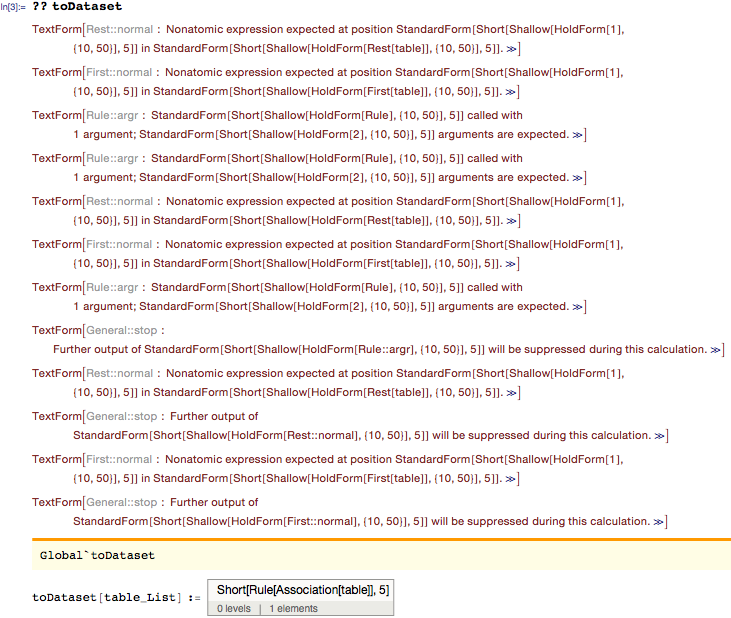 It appears to be something related to the head Dataset being on the RHS.

As a work-around, we can temporarily block the errant definitions while we inspect toDataset:

The defect appears to be a subtle interaction bug between Information and Dataset since expressions like the following do not exhibit the bug:

The problem is more general than within the context of Information. Both of the following expressions also generate many warning messages:

Furthermore, there appears to be an evaluation leak involved:

This behaviour is very much like what happens with Graphics objects. The front-end attempts to render them in output cells, which implies evaluation:

We might just have to live with this behaviour in both cases (although a way to turn it off would be useful, just as the debugger allows for graphics).

A work around seems to be to not have Dataset as the first Head encountered...

So the first Head the parser sees is Apply and not Dataset.

Not the answer you're looking for? Browse other questions tagged bugs formatting dataset or ask your own question.