What I am trying to do is make a sparse block-banded (Toeplitz) matrix, where the block matrix has the same banding as the blocks (nested or fractal-like). Ideally, I would just be able to do:

However, it gives the error that "insufficient positions are available in the Band[<>] to fit all the values SparseArray[<>]..."

The trouble with using Normal to unsparsify the matrix (so that ReleaseHold will work) is that it isn't feasible for large k. There are a few other approaches I tried (such as using an undefined f or converting the inner sparse matrices ToStrings), however they all have the same trouble of requiring Normal to undo this.

So to reiterate the question, can SparseArray take sparse arrays as elements and how can I get it to treat it as a scalar (when used with Band)?

"can SparseArray take sparse arrays as elements?" simple answer no.

You can make a single SparseArray of whatever depth you want though, eg for your example: 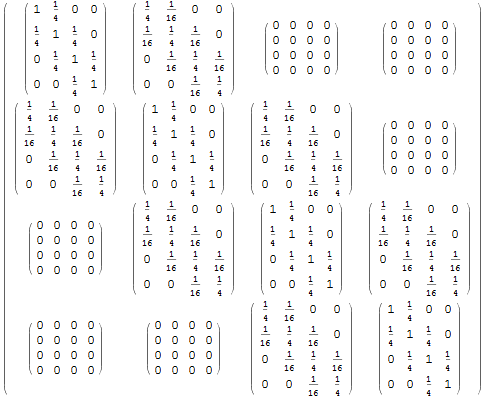 Not the answer you're looking for? Browse other questions tagged sparse-arrays or ask your own question.

3
Transforming a huge rectangular table to Sparse Array
11
Building sparse array from packed arrays
12
Most efficient way to build block / banded SparseArray
5
Sparse matrix processing: flip sign of top-left entries of the matrix
3
How to speed up my code using Sparse-array possibly?
7
Efficiently populate sparse matrix with band structure
3
How do I pass indices to a function when constructing a SparseArray?