Passing an unevaluated part of an association to a function

I'm making a UI widget that controls sound volume on a speaker using a slider, e.g.:

The slider here directly manipulates the volume field, nested in the global settings variable, which is the intended behavior.

However, if I embed settings inside a speaker variable, it stops working:

Specifically, the slider updates the sound field, and drops the volume field altogether, so that the speaker variable becomes:

Is there a way to pass a reference to a specific part of an association (rather than its value), and then have the UI dynamically modify that part?

My earlier assertions were incorrect or at least incomplete. I now believe the problem in your code originates because of a particular behavior that can be seen in this separate example:

It seems that for assignments to work correctly multiple specifications should not be given within any set of brackets except the left-most. For example with a deeper nested association all of these fail when used in assignment:

Whether this is a bug or follows from known evaluation rules I am not prepared to say. (I have made enough mistakes already!) However we can solve the problem by using either the the full Curry form (asc[foo][bar][baz]) or the single head from (asc[foo, bar, baz]). In the case of your example a minor change will work:

However a problem awaits; consider a deeper nesting and this result:

Tag Missing in Missing[KeyAbsent,c][sound][volume] is Protected. >>

One can either be careful to avoid this situation or we can convert that syntax into flat form. For the latter I propose:

Hopefully one can now throw any of the forms at this and it should work: 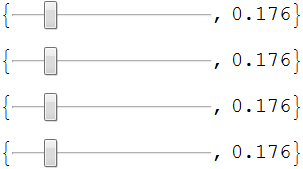 If I were to use the dyn variable as a reference to the volume field of the association, how could I perform operations on it outside of the slider? E.g. if in your example I were to write {Slider[dyn], "Volume: "<> ToString@dyn}, it would not return the value of dyn next to the slider, but Dynamic[asc[a, b, c, sound, volume]] instead. Is there a way around that?

Within the definition I provided above I believe one would need something like:

A better approach might be to use an undocumented but longstanding syntax of With that holds its substitutions; := in place of =:

You can use what I call the "module trick" to bind a local variable to the association returned by speaker["settings"], this reduces your problem to the previously solved one and works.

Not the answer you're looking for? Browse other questions tagged dynamic associations assignment hold slider or ask your own question.

189
What are some useful, undocumented Mathematica functions?
33
How to organically merge nested associations?
2
Manipulating unevaluated expressions in nested function calls