Why do I need to apply DiscretizeRegion to a derived region to visualize it?

What are the design principles, or other explanations, as to why one needs to apply DiscretizeRegion to obtain a graphical representation of a derived region, rather than Graphics or Graphics3D? (It's not what I expected.)

rather than the corresponding expression with Graphics instead of DiscretizeRegion.

The same issue arises with derived regions that are 3-dimensional, where one might expect to display them with Graphics3D but in fact must use DiscretizeRegion again.

As ilian pointed out in a comment, you are not limited to DiscretizeRegion for visualizing a region. There is also RegionPlot, which may be more to your liking. 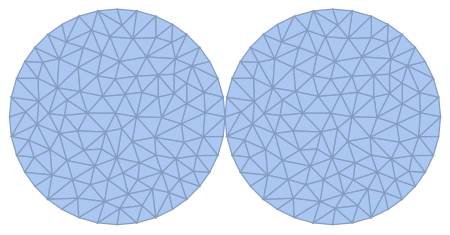 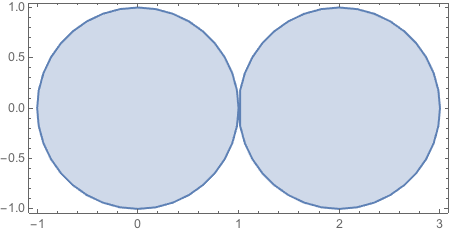 Graphics (and Graphics3D) accept graphics primitives as input. Version 10 introduced a number of special (or basic) geometric regions which serve as both regions and graphics primitives, so they can be given directly to Graphics (at least the 2D and 3D cases), for example Graphics[Disk[]].

When it comes to derived regions, sometimes they directly correspond to a primitive, for example

and thus can be fed to Graphics (by the way, a number of similar region autosimplification rules are under development). However, there isn't a graphics primitive corresponding to

or, the equivalent region in different form

Besides boolean operations, there are other ways to construct derived regions, for example TransformedRegion where the result generally is not going to be representable as a combination of graphics primitives.

On the other hand, a MeshRegion is built from cells which are graphics primitives and thus can always be drawn. The default is for mesh regions to typeset as graphics, which is why the result of

is immediately visualized. In the next example, the intersection is again a (boundary) mesh region and is displayed accordingly

Not the answer you're looking for? Browse other questions tagged plotting graphics regions or ask your own question.

8
Want Interactive PlotRange of Graphics[{}]
14
Image Processing: Finding Orientation and Position of Symmetry Axes
0
Why this region is bad?
11
How to display MeshRegion without vertices
3
Strange behavior with SliceDensityPlot3D using custom surfaces, Mesh lines have a great influence on the density plot
2
How do I Define a Module Which Displays Some Graphics and Returns Some Data?
9
DiscretizeRegion fails for a triangular region
4
Intersection of sphere and region below a plane-DiscretizeRegion was unable to discretize the region ImplicitRegion
1
DiscretizeRegion was unable to discretize the region ImplicitRegion
2
Plotting large scale image embeddings