Export Plot3D in Mathematica 10.1 is Rasterized by default

When I use Export to export Plot3D to PDF format, I get different behaviour in Mathematica 10.1 compared to 10.0. In particular, version 10.1 Rasterizes the graphics by default:

How can I turn off this rasterization? Can I set the default back to vector images?

Indeed, 3D plots like this were exported as vector graphics with generally huge numbers of polygons in version 8. But even then, the export was automatically rasterized whenever there were VertexColors present in the plot. I described this as a trick for getting smaller PDF files here, and also used it e.g. here.

So in general, I think it's actually a good thing that PDFs generated from 3D graphics are rasterized, provided it's done at a resolution appropriate for the desired device. However, despite this change in version 10, the developers haven't gotten this automatic rasterization quite right yet. For example, here is an issue that didn't get fixed, but which still can be repaired by artificially inserting a texture with VertexColors in the plot (that's what I do in my answer to the linked question).

So now we apparently have mandatory rasterization. While this makes exported files smaller, it can also backfire when you just have a Graphics3D with simple objects such as lines and a few polygons. Then there may not be any disk space savings at all from rasterization, but you pay the price of lower quality without reaping any rewards.

As a workaround for this lack of choice in Export, you could manually Print a selected Graphics3D as I do in this screen shot: 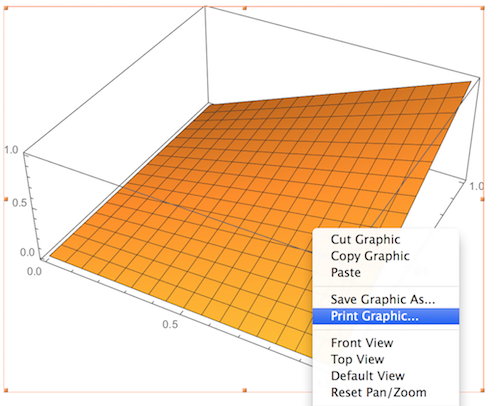 I right-clicked on the graphic and selected Print Graphic... from the context menu. Then I used the print dialog to save as PDF instead of printing. The result is a PDF file that maintains everything in vector graphics form (at least under Mac OS X). I think the printing route works because it assumes that the proper rasterization is going to be done by the printer driver, so Mathematica doesn't have to worry about it (since it's not meant to be a stored file). Of course, they may just have overlooked this loophole (let's hope they keep it open, then one could even consider making a palette for it).

Rasterization can also be avoided by exporting to EPS, but that format is outdated and can't handle opacity.

Another way to get the exported file as vector graphics is this:

Here, I actually export a 2D graphic into which the 3D figure has been placed as an inset.

Unfortunately, on version 10.3 the solutions proposed by Jens do not seem to work in at least some situations (see edit on this other question).

A workaround that I found to work well in my case is simply using GraphicsRow, which seems to automatically correctly tweak the options of Inset in a way that produces the expected result. If the 3D graphics to export is plot, just use

Another workaround proposed by Alexey Popkov in a comment is using

These are of course simply slight variations of the solution with Inset given by Jens, but they're probably good to know for someone (like me) not knowing how to properly handle the options of Inset.

Not the answer you're looking for? Browse other questions tagged plotting export graphics3d pdf-format or ask your own question.

9
How can I export 3D plots as vector graphics?
39
Export Plots to $\LaTeX$
14
Export MatrixPlot graphics to PDF
18
How do I flatten transparency on a graphics, for conversion to eps or similar?
16
Exporting 2D & 3D graphics for use in Adobe Illustrator
18
PDF Export crashes Mathematica
8
Exporting 2D projection of 3D graph in SVG form
4
How to insert Graphics3D into Graphics without white frame
5
How can we Rasterize only plots profile without frame or labels?
12
Is ExportString defective in V11?
See more linked questions

10
Efficient export of complex graphics to PDF
8
Does PrivateFontOptions -> {"OperatorSubstitution" ->False} fail in version 10?
16
Exporting 2D & 3D graphics for use in Adobe Illustrator
2
Cropping Vector Graphics without Rasterization
5
Projecting Graphics3D onto the 2D plane for vector export (and solving other issues; revisited)