I am trying to superimpose a PDB file into a 3D plot of points extracted from the PDB model, while making the PDB somewhat transparent for easy viewing of plotted points.

My code first plots the data points extracted from the position of 3 atoms (the XYZ coordinates are take directly from the .pdb file.

Each point represents the atoms at which a Dye label with a 6 carbon linker strand is attached to a real physical DNA strand matching this .pdb sequence. This linker molecule is flexible enough to allow the Dye label to potentially occupy multiple positions around the DNA atom to which it is attached. To represent this, I added some pretty spheres that enclose the space the label might be able to occupy.

I then use the above to generate a Graphics3D object out of several primitives. The three atom positions extracted from the PDB, three pretty spheres of points centered at each atom position and scaled to the length of a 6 carbon alkane chain. And finally, a triangle between the points to aid the eye. 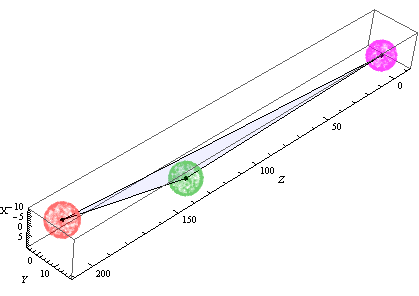 I then load the .pdb file

Okay, now for the issue at hand...

When I look at the .pdb by plotting or by using AbsoluteOptions[DNApdb, PlotRange], I find that the scale is waaayy off. So I attempted to use Rescaling transform to match up the ranges (not ideal in the first place as the atom positions from the 3D plot are not located at the extremes of the pdb and so therefore will not automatically match up without extra adjustment.)

Anyhow, the command does not seem to scale the image. I use AbsoluteOptions to get the two data ranges and then attempt to scale the .pdb to the data points.

Also, attempts to make the pdb graphic object transparent using Opacity[] has failed to work in the way I am trying to implement it. I am also hoping that I am just trying to use it incorrectly.

Here is an example,

Which will return an error saying that Opacity is not a Graphic Object. However attempting to combine this command with the .pdb using Graphics3D also returns an error.

I am grateful for whatever help I can get.

The answer is actually in the pdb documentation:

Yes, for some reason, when Mma imports a PDB file it automatically converts the atoms coordinates (by default in Angstroms) into picometers, and it explains why you observe a completely different PlotRange than expected. In other words, the coordinates have just been rescaled exactly by 100.

You can check that visually by importing the coordinates of your dna molecule (instead of the graphics):

returns the first coordinate of the molecule in the pdb file:

which corresponds to the first line of the pdb file:

This atom corresponds actually also to your DNA1 atom ... This is how I figured out what was the problem.

So, the simplest solution here I think is to convert your DNA1,DNA2,DNA3 atoms coordinates into picometers (x100), and everything will superimpose fine.

Here is what I get :

and concerning your opacity problem you can do:

Here is the other solution which will you prevent you from rescaling the axes. Instead it rescales the imported pdb 3D graphics.

Your imported pdb graphics, DNApdb, is actually a Graphics3D object, which you can tell by running:

Here, the XYZ atoms coordinates are contained inside GraphicsComplex.

To rescale the XYZ:

Not the answer you're looking for? Browse other questions tagged graphics3d import chemistry or ask your own question.

3
Represent Plot Scale with an offset
2
Opacity and overlapping points on ListPlot3D
2
Dynamically change the ViewCenter location of a 3D graphics
2
How to scale one axis of a 3D plot?
11
Tube with variable color, opacity, and radius
1
Combine Plot and Graphics 3D for open box