How should I debug a failed Manipulate of RegionPlot?

I am trying to build a package that will display a sector of an ellipse where the angle is taken from a focus of the ellipse rather than from the center. The code seems to work fine when called with individual values.

A problem arises when I try to embed a call to the code within a Manipulate. Here is a simplified failing version:

When I move the slider, I can see errors at some different values of ang (such as 1.5708 and 0.119381), while others work fine. The error message says "The cell Line[{1,1}] is degenerate." and seems to be coming from BoundedMeshRegion.

I have tried several approaches to debugging the problem:

1) I tried removing the Manipulate and plugging in a failing value, but the code worked fine.

2) I tried Trace, but the output was quite long and unenlightening to me.

3) Incidentally, removing the PlotRange call removes the error message, but the displayed plot is clipped on both ends.

My question is how to debug this problem? That is, how should I think about attacking the problem. Alternatively, am I misusing the computational resources (e.g. RegionPlot) in some way?

Manipulate typically changes the default value of the $PerformanceGoal control to "Speed" instead of "Quality", in order to speed up evaluation of dynamic content (see the first "basic example" in its documentation page). Typically this doesn't matter much, but in some cases this can influence the outcome of some algorithms that are sensitive to the working precision.

Unfortunately, something in your implementation is among these algorithms, even without Manipulate. Compare the following two results, obtained using arbitrary vs. machine-precision arguments: 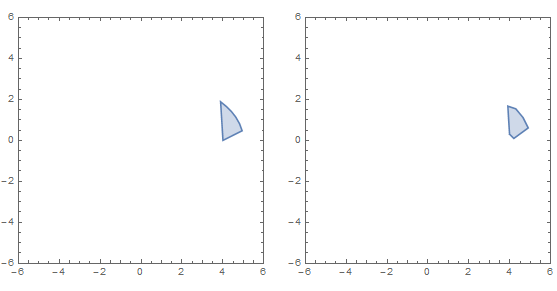 Fortunately, however, you can manually set the $PerformanceGoal setting within Manipulate by wrapping its argument in a Block: 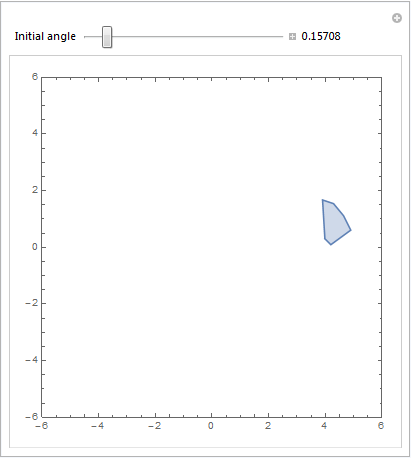 Note also that I removed the Show wrapper because it wasn't really doing anything in your example, but that had nothing to do with your errors. This does not give me any more errors as I change the values of the ang parameter.

Note that the quality of the plot is still not very good. To improve on that, you can e.g. specify an arbitrary-precision step for the ang variable within Manipulate: 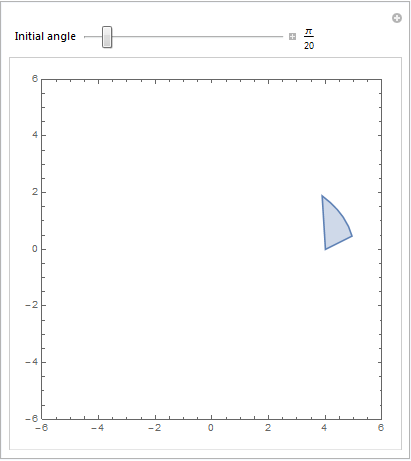 I am going to try and address some of your questions in comments as best I can. Other shorter answers will just be added as comments below. Keep in mind that some of the issues you raise may be results of very complex interactions between features of the language, and some times "informed trial-and-error" is your best bet in figuring some of these issues out.

On the issue of machine vs. arbitrary precision numbers, approximate numbers are practically distinguished by an explicit decimal point. If you don't specify precision further, then they will be evaluated using machine precision. I would suggest the following documentation pages and how-to's that frame the issue well:

On the Pi/2 in the Manipulate: the key is in the fact that Manipulate's internals use machine-precision increments (as you can see in the value of the slider variable in the posted picture) even when you specify an arbitrary precision endpoint. The Pi/20 used above that induced Manipulate to use arbitrary-precision step increments instead.

It seems your Sector returns a region for which RegionMember can calculate its formula. RegionPlot is quite a bit faster on this fairly simple formula than on the region. Further, you don't run into the symbolic-numeric problem of reducing the RegionIntersection in whatever way Mathematica does under the hood. (I suspect it is using a algebraic/symbolic solver like Reduce on approximate machine-real input, whereas RegionPlot on a formula is purely numeric. I confess I don't fully understand the problem, because I am unable to reproduce it outside of Manipulate.)

You can control the quality of the plot with options like PerformanceGoal-> "Quality", PlotPoints->ControlActive[15, 51], and MaxRecursion. Note the Evaluate is very important, or RegionPlot will take a very long time. This ensures that RegionPlot is passed the algebraic formula; without it, the formula will be recalculated every time RegionPlot tests whether a point is in the region or not.

It seems to me that you would do better with ParametricPlot than RegionPlot. It is usually much more efficient, both in speed and quality. All you need is to be able to parametrize the region. I think this draws the picture you want: 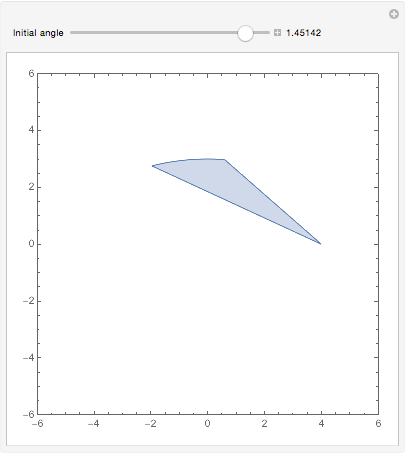 It will always have a nice, sharp corner at the focus.

The root cause of the problem reported in the question was a bad formula. This led to a call to ArcCos that, with some arguments, produced a complex number as a result. When this value was given to any of the Region functions, an error resulted.

The only way that I could find to debug the problem was traditional: isolate a failing case, working step by step examining each computation.

Thank you for your answers, from which I learned a lot.

Not the answer you're looking for? Browse other questions tagged manipulate version-10 regions or ask your own question.

5
Package function not called from button in a DockedCell expression
2
Manipulating parameters in a complex algorithm
7
RegionPlot with PlotRange vs RegionPlot with domain
0
RegionPlot Difficulty
8
TransformedRegion, RegionPlot broken in 10.0.2.0?
3
How can I control label output for a HorizontalGauge
1
Manipulate chart disappears when sliders are moved