Sorry in advance for my logorrhea: I just want to make sure all of the information is here.

I am investigating site percolation on a square lattice. I have a working, depth-first, recursive clustering algorithm. The algorithm as coded is recursive but procedural, so I want to find a way to mimic the recursive nature of the algorithm using Mathematica's functional-programming style. In addition, the Kernel dies if the number $l^2$ of grid points is too large and if the filling fraction is large enough that the percolating cluster is very large; I presume this is due to the large recursion depth of the search. (If coded in C, I can do much larger lattice sizes and filling fractions.) Therefore, I would like a way of getting around this problem of the Kernel crashing. In summary, I would like to:

I have tried to come up with a way of implementing this using functions like Nest or Fold, but I can't see how to mimic the tree-nature of the recursive search, since they seem not to be able to deal with trees.

The input is an $l\times l$ array configuration consisting of $-1$'s at filled sites and $0$'s elsewhere. The output consists of a list of {clusterNumber,clusterSize}s and an $l\times l$ array with the $-1$'s replaced by the corresponding cluster number and the $0$'s left alone. Sites belong to the same cluster if they are nearest neighbors (diagonals not allowed). As an example in a $4\times4$ lattice,

Below, you will see that the configurations are Flattened. This is merely a programming convenience. To go from one version to another, I either Flatten[configuration] or Partition[configuration,l].

Before talking about the algorithm specifically, note that

is a function that returns a list of the indices of the neighboring sites of each site, where the indices correspond to the flattened configuration. For instance,

because site number 2 is bordered by site 1 on the left, 3 on the right, and 6 below. (This can certainly be implemented in a nicer way, so feel free to fix this, but this is not the focus of this question.)

In practice, I run the code in a Block in order to set the $RecursionLimit larger, which is necessary for larger lattice sizes and larger filling fractions. For instance, for the $4\times4$ configuration above, we would call the function as

I have stripped out the clusterSize and clusterIndex finding from the original code and Virgil's two versions (the image-processing version and the recursive version) in order to benchmark just the clustering algorithms.

Specifically, I have a random configuration function that randomly chooses site indices to fill and returns the grid in the correct format:

I have then defined the three clustering codes. First, the original, essentially:

For each, I chose 50 random configurations at a filling fraction of $\approx0.593$ for various choices of $l$ and averaged the times taken to complete the clustering process, using

The results are interesting! 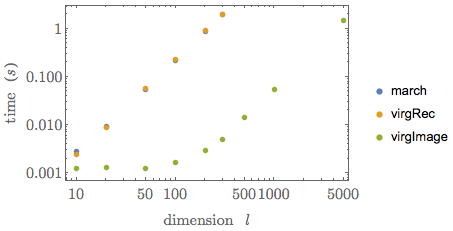 This sidesteps most of your code, so it might not be what you are looking for, but I believe your goal can be achieved with Mathematica's built-in image processing capability, specifically: MorphologicalComponents!

It appears that finding the cluster indices with Position is extremely slow with large datasets, although the rest of the code is relatively fast. With thanks to ciao (see below), I've replaced it with a much faster construction.

Here is my take on what the OP was actually asking for: a Mathematic approach to a recursive algorithm. The actual algorithm is not much changed - the use of Sow and Reap in the OP's code is a good idea, and I agree that the recursion needed is not amenable to Nest or Fold - all I can do is clean it up a little and exchange the Do for a Scan over the populated sites:

Applying this to inputConfig gives

The first item in the output is the list of {clusterNumber, clusterSize, clusterIndices} and the second is the input array with cluster numbers replacing filled sites.

I'd be interested to know if anybody can think of a more clever way of implementing the algorithm. Mathematica has the SparseArray object, which is a good fit for the input and output configurations we are dealing with here, so one might consider using those from the beginning for the input. Thanks to ciao, who pointed out that one can extract the positions of non-zero elements easily from a SparseArray with ["NonzeroElements"], we can restrict our attention to those only.

March - this is not a complete answer, but instead addresses the gathering of indices since that seems to be important. Here's a comparison of some methods, tested only on my cigar-lounge netbook so caveat lector.

Fill was ~0.5 for these tests. Times are for complete results from Virgil's code, just with index gathering changed. 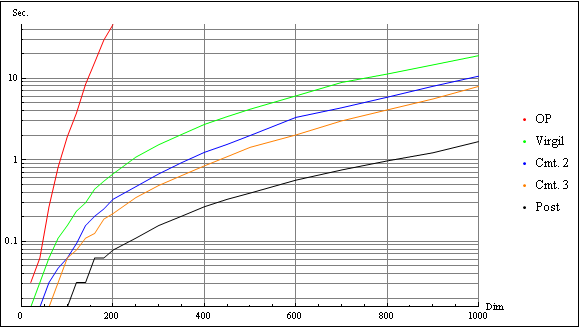 I hope you find use in this.

All done by Morphological Components

Not the answer you're looking for? Browse other questions tagged recursion functional-style physics procedural-programming or ask your own question.

0
How to get solutions for recursive relations using RSolve?