Finding the discrete Fourier transform for a simple oscillator?

Here's what I want to do, initially at least: I have an oscillator, it's in some force field, I've integrated it using the Euler method, so I have a list of points of the form {t,x}, where t is the time and x is its position. Here it is, plotted: 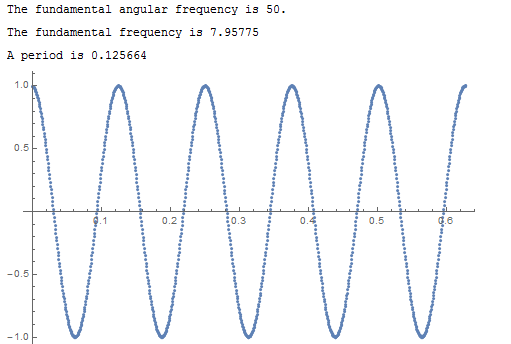 Now (before I do more complicated stuff), I want to get the Fourier transform, which at this point ideally should be basically just a Dirac Delta function right around the fundamental frequency of ~7.95, right? Just by eye, the function is pretty clearly a single frequency.

However, Fourier[] doesn't take a list of pairs of the form I said, only single values. So I do:

And then I can do Fourier on it, like the example from the documentation: 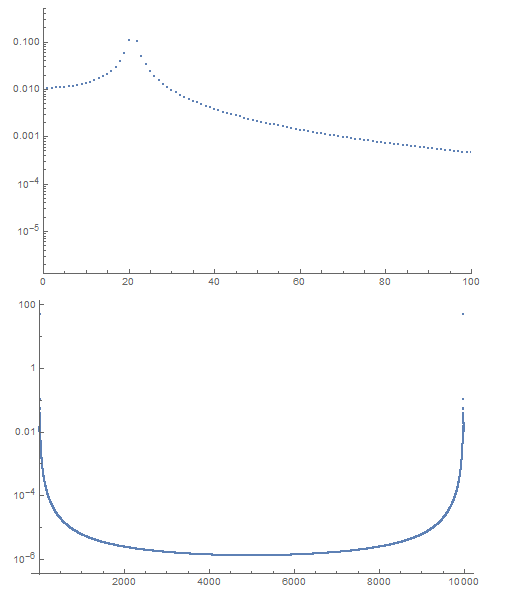 So there are two main problems for me here. The first is that, as you can see in the first plot, there is a peak (I assume at the fundamental frequency), but the actual number is wrong. I assume this is because I basically stripped my data of any information about the time to put it in the form accepted by Fourier[], which I guess basically just assumes the "independent variable" of your data is their integer indices. So I'd like to have it graph it in the form where it'll show the peak at the original frequency. I tried "scaling" it, assuming that if my data before ranged from 0 to 10, and had 10,000 values, so that Fourier was calculating it with the length scale {0,10000}, then any frequency Fourier returned would actually be 10000/10=1000 times smaller than the actual frequency, so I could just plot

to get what I want, but this didn't work.

My second problem is visible in the second graph, that aside from the peak near ~20 (from the first graph), it starts diverging for large numbers too. Why's this happening?

edit: From looking at a few threads it seems like people not sampling enough (lower than the Nyquist frequency) seems to be a a common problem, but I don't think it is here, in the example that produced those images, I have:

So I'm sampling many times in each period.

You are not normalizing your Fourier output correctly. 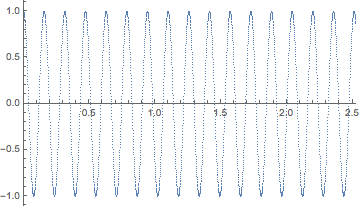 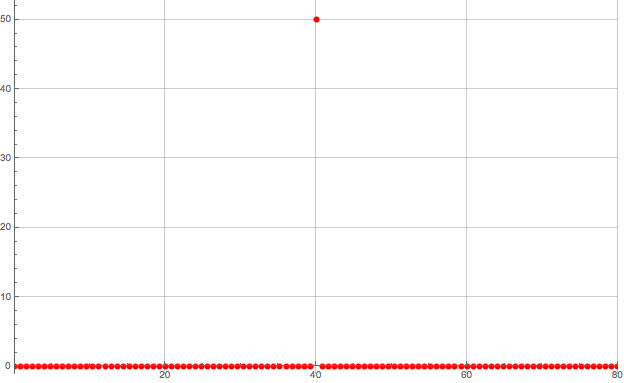 I'm specifying your data range in units of period. If you change your rangePer to 50.5, "all of a sudden" you will get a peak instead of delta function. This is a fundamental property with DFT.

Here is what you get for rangePer=50.5 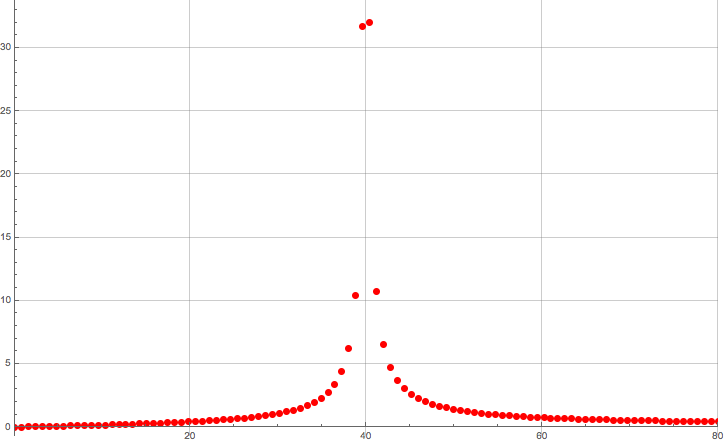 Not sure what do you mean by:

My second problem is visible in the second graph, that aside from the peak near ~20 (from the first graph), it starts diverging for large numbers too. Why's this happening?

You asking why it's symmetric?