Since Internal`Bag, Internal`StuffBag and Internal`BagPart can be compiled down, it is a precious source for various applications. There were already many questions why AppendTo is so slow, and which ways exist to make a dynamically grow-able array which is faster. Since inside Compile many tricks can simply not be used, which is for instance the case for Sow and Reap, this is a good alternative.

A fast, compiled version of AppendTo: For a comparison I will use AppendTo directly for an easy loop. Ignore the fact that this would not be necessary here, since we know the number of elements in the result list. In a real application, you maybe wouldn't know this.

Using Internal`Bag is not as expensive, since in the above code, the list is copied in each iteration. This is not the case for Internal`Bag.

Comparing the run time of both functions uncovers the potential of Internal`Bag:

The following information was collected from different sources. Here is an article from Daniel Lichtblau who was kind enough to give some insider information. A question on MathGroup led to a conversation with Oleksandr Rasputinov who knew about the third argument of Internal`BagPart. Various other posts on StackOverflow exist which I will not mention explicitly. I will restrict the following to the usage of Internal`Bag and Compile together. While we have 4 functions (Internal`Bag, Internal`StuffBag, Internal`BagPart, Internal`BagLength), only the first three can be compiled. Therefore, one has to explicitly count the elements which are inserted into the bag if needed (or use Length on All elements).

The important property of the following examples is that they are completely compiled. There is no call to the kernel, and using the Internal`Bag in such a way should most likely speed things up.

The famous sum of Gauss; adding the numbers from 1 to 100. Note that the numbers are not explicitly added. I use the third argument to replace the List head with Plus. The only possible heads inside Compile are Plus and Times and List.

Creating a rank-2 tensor by creating the inner bag directly inside the constructor of the outer one:

An equivalent function which inserts every number separately

A Position for integer matrices:

This last example can easily be used to measure some timings against the kernel function: 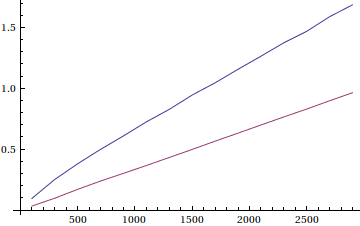 I am somewhat reluctant to offer this as an answer since it is inherently difficult to comprehensively address questions on undocumented functionality. Nonetheless, the following observations do constitute partial answers to points raised in the question and are likely to be of value to anyone trying to write practical compiled code using Bags. However, caution is always highly advisable when using undocumented functions in a new way, and this is no less true for Bags.

The type of Bags

These are created simply by stuffing one Bag into another, and do not have any special type associated with them except the types of the registers containing the pieces. In particular, there is no "nested Bag type". Per the casting rules given above, it is theoretically possible to stuff Integer Bags into a Real Bag and later extract them into Integer registers (for example). However, this technique is not to be recommended as the result depends on the virtual machine version; for instance, the following code is compiled into identical bytecode in versions 5.2, 7, and 8, but gives different results:

The result from version 8:

Stuffing Bags of mixed Real and Integer types into a Real Bag produces even less useful results, since pointer casts are performed by Internal`BagPart without regard to the original type of each constituent Bag, resulting in corrupted numerical values. However, nesting bags works correctly in all versions provided that the inner and outer bags are of identical types. It is also possible to stuff a bag into itself to create a circular reference, although the practical value of this is probably quite limited.

About your question regarding the definition of the type of local variables in Compile, Compile has an optional third argument that allows you do this in the same manner you specify arguments. It helps the compiler solve some type ambiguity issues sometimes as by default a local variable is considered a Real number.

Not the answer you're looking for? Browse other questions tagged performance-tuning compile tensors undocumented or ask your own question.

584
Where can I find examples of good Mathematica programming practice?
192
What are some useful, undocumented Mathematica functions?
168
List of compilable functions
176
How to compile effectively?
9
Better code to find Narcissistic number
9
How to compile the code for generate Pythagorean_triple?
44
What's the deal with next generation Wolfram compiler?
23
Efficiently collecting results inside a compiled function
21
Third argument of Compile
6
Delete elements from a list really fast
See more linked questions

23
Efficiently collecting results inside a compiled function
1
Compile with array operations
3
Evaluating arguments of module (inside compile)
6
How to compile this code?
4
Why does Compile not make my function faster?
2
Why won't nominally compilable function compile? (err Compile::cpintlt)
5
Compile with arbitrary array argument