Programmatically quitting the FrontEnd or running without one?

I have a conundrum.

I use an iMac's OS X 10.6.8 settings to start and stop the machine at the specific times that I need a particular notebook to run. I've done this because it has worked more reliably then timed events. Mathematica launches automatically when my computer boots and the notebook with all its cells set as Initialization Cells launches automatically and evaluates when Mathematica starts.

The last expression in the notebook:

as evident, saves this active notebook. I need this because some graphics in the notebook change and I want to review them later.

This notebook will be the only open notebook at the time of its evaluation.

So far so good.

Now I want the notebook to programmatically quit the Mathematica FrontEnd.

This gets tricky and presents (at least) 2 problems:

begins the process, but gives me the following popup window:

This doesn't help me, because I want this to run on its own and as stated above I have an OS setting that will shut down the computer soon after Mathematica would quit.

I won't have anyone in front of the computer to click "OK" and thereby allow the shutdown to proceed. No click no shutdown.

All of the notebooks cells, including the one with the:

set as Initialization Cells presents another problem. IF I can find a work-around for the popup warning above, I still need a way to break, abort, or interrupt the flow of control so I don't have a notebook, which will always open, evaluate, then quit Mathematica. At some point I'll want it to stay open to edit or change the code.

I've looked at variations of: 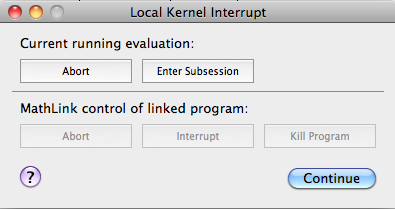 Pressing "Continue" or "Abort" just gives me the same popup window ("The notebook ..... contains a running evaluation...." as I had in "Problem 1".

If my solution in doing this includes automatically opening and evaluating the notebook I think I need some way to have a button or popup window come up which gives me a period of time, say 30 seconds to abort the closing of the application and its notebook. If no one aborts the process before 30 seconds I'd want the machine to shut down.

The notebook in question does a lot of different stuff: opening parallel kernels, lots of parallel mapping, creating graphics, and emailing results both text and graphics. Is it even feasible for this kind of complication to run as a script on booting of the computer?

Stumped and looking for some guidance.

An idea on how to use osascript (as also suggested by sebhofer in a comment to the question): with Mathematica running, execute

in a shell. It quits Mathematica completely. If there are unsaved notebooks, Mathematica pops up a dialog, so make sure everything is saved before doing that.

To be able to schedule this from a high level (ie from a GUI) you can write an Applescript containing tell application "Mathematica" to quit:

and create a calendar event to run this whenever you want. Or, at least, you can if you are not running OS X 10.8, as Apple appear to have removed this ability in the latest version (you can still use launchd, for instance).

How about an alternative: write a Mathematica script. Then calling it is as easy as

Or, more interestingly, you could make the script itself executable in a manner similar to a bash script by placing the following line as the first line in your script

Both of these options obviates the need to invoke the front-end.

This post addresses the problem of saving graphics output in an automated session:

E.g. with a file called test.m containing this:

Running this by a timed event will execute a cell in run.nb, saving the results:

In test.m you could of course evaluate the whole notebook using

(The "uncaught Throw" events referred to in the link do not affect execution.)

You'll need Mathematica in your path to run the script. For Windows this will work:

If you want avoid repeatedly adding Mathematica to the path here is a relevant post:

Not the answer you're looking for? Browse other questions tagged front-end automation or ask your own question.

12
Seeking strategies to deploy a function securely without a front end
15
How to save the result in the Notebook (.nb) and shut down the computer when the calculation is done
4
How can one *force* a front end session to *terminate itself* programmatically?
1
Closing front end from within