I get unexpected results when I run the following code (even before moving the sliders):

Notice that calling InfPoint with an argument fails to evaluate, even though the argument seems to be passed correctly. When I change the last "x" in the code to a "0", everything works as expected.

This code is modeled after this example found at tutorial/AdvancedManipulateFunctionality, which seems to work just fine:

There's something going on here that I don't understand. Can anyone explain to me how I should think about these nested controls?

One difficulty in using Manipulate is that it rewrites your code for you in ways that are not clearly explained in the documentation. The thinking is that this rewriting achieves the dynamic interactions described in the documentation without burdening the programmer with some of the tedious details involved. For instance, expressions that contain Manipulate variables get wrapped in Dynamic, so that they will be updated when the variable changes. This allows controls to interact with each other. But exactly how and when code is rewritten is not clearly explained.

should be equivalent to

It would be convenient to set their initial value to something other than the default left-most value. This is done by using a variable specification of the form {{var, init}, min, max}.

In the OP's case, the declaration

and result in a control

placed in the Manipulate output when shown in the Front End, with ang initialized to x. This is what m_goldberg and Kuba were referring to in their answer and comment respectively.

which is equivalent, by the default initialization rule, to

which also explains what Kuba observed.

In my opinion, this behavior is avoidable and should be considered a bug. However, WRI developers might disagree with me.

Note that we do not run into this problem with the example from the tutorial cited by the OP. The declaration

-- and results in the control

A workaround, as m_goldberg already pointed out, is to initialize ang explicitly.

You need to do some initialization. Manipulate often behaves strangely when its controls are not initialized properly. 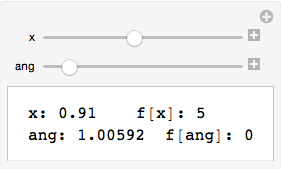 Not the answer you're looking for? Browse other questions tagged manipulate version-10 gui-construction or ask your own question.

1
Locators and Table within a Manipulate are not behaving
5
Noticeable slowdown in graphical performance when using manipulate
18
Mathematica Manipulate with macros AND variable number of controls (persistence desired)
3
Removing an extra curly braces when using Grid with an If statment
1
Lists not being recognized correctly within manipulate
2
How should I debug a failed Manipulate of RegionPlot?
1
Incompatibility between Dynamic’s second argument and Wolfram Demonstrations
3
How to Use Mouse Events & EventHandler in Demonstrations