How to create a bar chart from a list of heights *and* bin delimiter positions?

The closest I've been able to find is to pass to BarChart the bin counts produced by HistogramList; i.e. something like

This produces a chart whose horizontal axis is improperly scaled, which is not surprising, since I have not given BarChart any information that would enable it to do otherwise. I have not found a way to do so.

I need the output of both HistogramList and Histogram on a whole bunch of lists.

The documentation page for HistogramList shows that one can pass to BarChart the last member of the pair returned by HistogramList to approximate the output that Histogram would produce with the same input, but, as already explained, the resulting chart's horizontal axis is not properly scaled.

The documentation page for BarChart, on the other hand, is huge, and is filled with outlandish possibilities, such as how to make a bar chart out of copies of a famous pornographic image (or, rather, of a sufficiently decorous fragment thereof), but I'm having no luck finding in all this clutter a way to do what I'm trying to do. Too pedestrian, maybe...

For historical reasons I need to stick with the "look" that Histogram produces by default, so I adapted lalmei's answer.

I post my embarrassing, plodding code below, because I'm sure one of you can do it much better. (More generally, comments and criticism on this code are always welcome.) 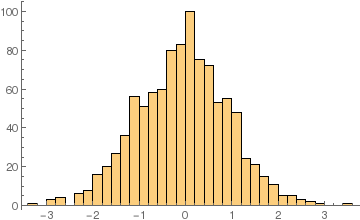 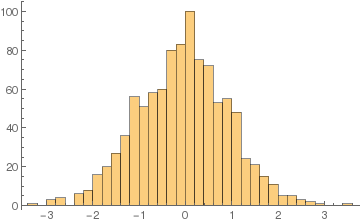 While not a Bar Chart per se, I usually prefer to use the result from HistrogramList directly with ListPlot and then join the points with InterpolationOrder->0. 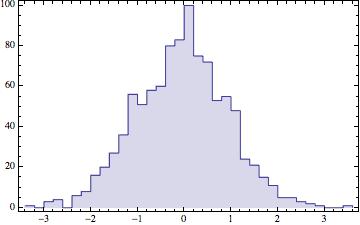 Ok, if you really want the bars, your update gave me an idea. Essentially add zeros in between the bins and keep the same settings.

Now just join with the original points, and make sure to sort them, or Joined doesn't work properly. 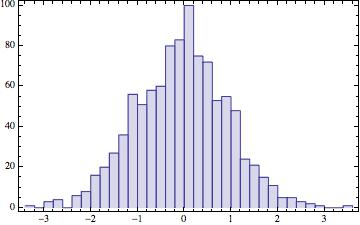 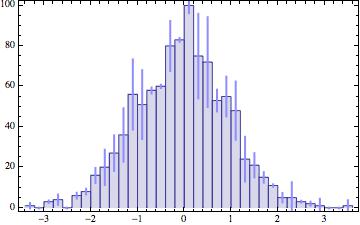 You can already achieve this using Histogram. No need to fuss with ListPlot.

Use these forms for the second and third arguments of Histogram, and ignore the first argument:

The following bin width specifications $bspec$ can be given:

Different forms of histogram can be obtained by giving different bin height specifications $hspec$ in $\mathsf{Histogram}[data,\, bspec,\, hspec]$. The following forms can be used:

HistogramList essentially returns $\{b,\,h\}$, so you can easily create $\mathit{fb}$ and $\mathit{fh}$: they are just functions that always return $b$ and $h$.

This function takes the result of HistogramList (or similar data structure) and gives a Histogram: 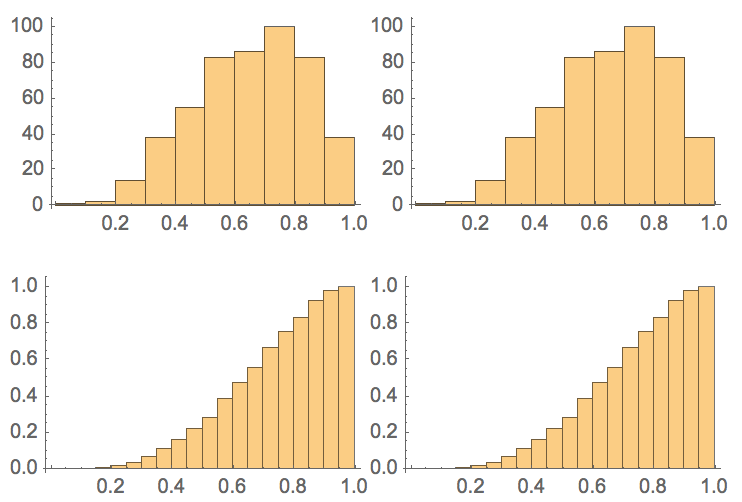 Edit: The same technique can be used to answer these very similar questions:

5
How to change texture of chart bar?
5
How do I animate a bar chart?
0
Data from Excel does not show up in Bar Chart
0
Histogram list returning bin centers and count numbers rather than bin domain points
1
Stacked Bar Chart with a bar showing the forecasted quantity and the real quantity as the part of this bar
2
Create inclined chart labels on stacked bar charts
2
how to construct a fancy bar chart
2
how to create a `directed` bar chart
0
how to create a new bar chart using the data from the existing barcharts