Is there a way to output histogram x and y data without using the Histogram chart function?

So, I would like to pre-bin the data, put it into {x, y} form (i.e., a list of ordered pairs), and plot it with ListPlot -- with the hope that this will be a workaround to using Histogram[list, PerformanceGoal -> "Speed"] directly.

The BinCounts function is very nice: it takes a list, followed by a bin specification, and outputs the number of elements found within each bin. For example, consider one of the examples given in the documentation:

Is there any way to automatically print both the "x" and the "y" values for a "histogram" to be plotted using ListPlot? Or should I write my own function? I can write my own function, but I just wanted to ask, because it seems somewhat odd that there does not seem to be a way to use Histogram to simply output the data (and suppress display of the fancy, time- and memory-consuming chart graphic).

You need the HistogramList function, which gives you both the bins (x values) and the heights (y values). For example (using your data and bin specification):

Note that the lengths of bins and counts are not the same:

To use the above bins and counts with ListLinePlot or an equivalent function, use the various approaches in this question and its answers to pair up the two lists. Using the highest upvoted answer: 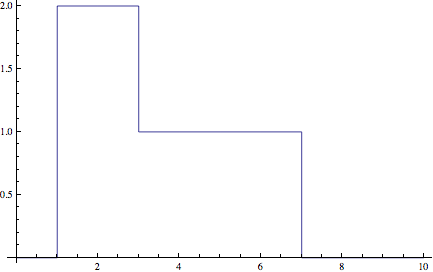 As you rightly note in your comment, HistogramList is new in version 8. However, BinCounts has been around since version 6, and so here is an equivalent function that works from version 6 onwards.

You can verify that this indeed returns the same results as the version 8 equivalent above:

Not the answer you're looking for? Browse other questions tagged plotting list-manipulation histograms or ask your own question.

7
Smooth/histogram a 2D set
9
Rapidly binning 3D data
12
How to rebuild original data from a histogram?
6
Histogram3D using sums instead of counts
9
How do I display a histogram with normalized counts?
0
Plot a histogram according to a set of rules using data from two tables
3
BarChart: First Bin centered at 0 instead of 1
3
Is there a way to generate a data-driven Monte Carlo sample from a histogram?