The following behavior was observed in Mathematica 10.1 (Windows 64 bit)

When attempting to evaluate the following integral, Mathematica outputs several messages which appear to be some sort of internal error leaking out. 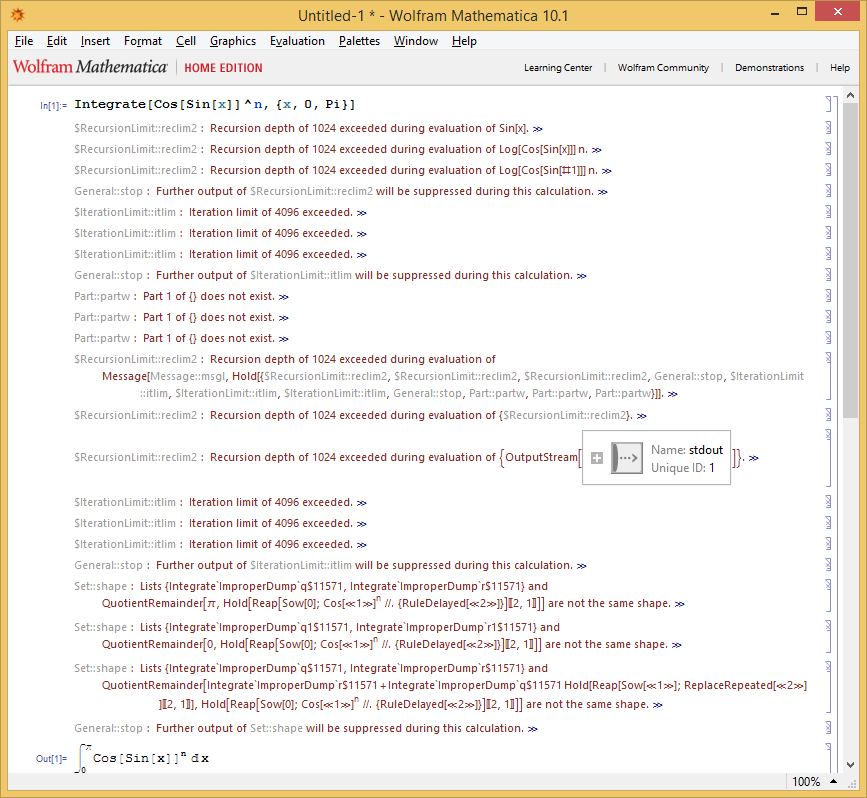 I tried to resolve the issue by increasing $RecursionLimit, but regardless of what I set it to (including Infinity), the value appears to be ignored as the first error messages still appear and always reference a "Recursion depth of 1024".

If I increase the $IterationLimit to Infinity, Mathematica appears to honor the value and simply hangs after the first General::stop message is printed.

Evaluating the integral with no limits returns the integral unevaluated without messages. Using different limits has different results depending on the limits:

returns unevaluated with no messages, whereas

Seems to run into some internal loop where similar messages are printed over and over (seemingly infinitely).

Does anybody know how to alleviate these errors?

Is there anyway to force Mathematica to honor my recursion limit?

This bug has been fixed as of version 10.2.0. The example now returns unevaluated without any messages.

Not the answer you're looking for? Browse other questions tagged calculus-and-analysis bugs or ask your own question.

5
How can I tell why Mathematica returns no solution to this system of nonlinear equations?

7
Can't compute definite integral
3
Real integral evaluating as indeterminate
3
Strange integration
1
Solving for the limits of an integral
2
Triple/Double integral over outer side of a cylinder
5
Bug in Integrate?