I am trying to solve a set of ODES which represent a second order consecutive chemical reaction.

I want to solve these equations either for a generic expression for k1, k2, k3, or k4, or for a particular value with these particular boundary conditions, n.b. not to sure if both t= 1 and t = 4 needs to be used...

I have tried to use both NDsolve and Dsolve, NDSolve requires that I have initial values for k1, k2, k3, k4 and Dsolve doesn't seem to want to help... the rest of my code for DSolve...

Any help would be appreciated!! Chemistry is my forte not Mathematica!!

This Answer has been revised in two respects: First, boundary condition values are Rationalized to postpone roundoff issues until the very end of the calculation. Second, equations ans3 are solved for k1 τ1 instead of Exp[-k1 τ1], etc.

and eqn as in the Question.

These equations become linear, if CF[t] can be eliminated from the right side. This is accomplished by the change of independent variable t to τ such that D[τ[t] ,t] == CF[t]. The equations then become

which are solved by

To apply bc1, first isolate the four exponentials

Note the substitution {k1 -> k1/τ1, k2 -> k2/τ1, k3 -> k3/τ1, k4 -> k4/τ1}, which has the effect of eliminating the unknown quantity, τ1, from ans3. The first four equations now can be solved for the four k. Because NSolve can handle only the first two transcendental equations, we proceed as follows.

Minor modifications to the boundary conditions can, of course, make the system consistent. For instance, subtracting 0.003565 from bc1[6] does so.

Finally, we remark that summing the first five eqn and their corresponding boundary conditions yields

which indicates that one of the first five eqn is redundant and could have been deleted. In fact, CE is the logical variable to drop.

Once the ratios of the K are known, it is straightforward to integrate the original eqn and from there determine τ1 = 52.3361. Rescaling the k by τ1 then gives 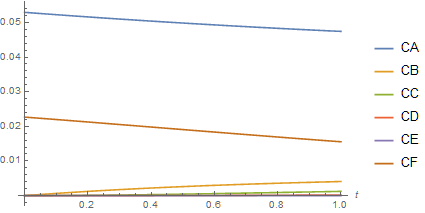 Not the answer you're looking for? Browse other questions tagged differential-equations equation-solving chemistry or ask your own question.

6
Unexpected results from NDSolve
3
NDSolve fails for certain choices of parameters and solve range
5
Solving coupled differential equations with unknown constants
2
Solve for several constants using a set of initial conditions
7
DSolve and NDSolve plots are different
2
How do I use Solve with conditional equations?
4
How to get DAE representation from equations?
2
Numerically solving 2 nonlinear PDEs of 2nd and 1st order