Assume that four masses are connected to each other by springs while two of them are pinned down at their initial positions. Find the position of masses when system is at its minimum (potential) energy. 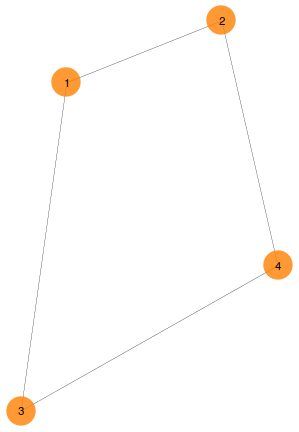 I've got this idea after reading this article. In a mass-spring system, the energy is equal to:

where each spring is counted twice. $l_{ij}$ is the distance of two masses $i$ and $j$ and $l_{0}$ is the spring rest length. My initial try was to use steepest descent to relax the system which was not the best option, so I switched to conjugate gradient.

The gradient on mass $i$ is:

where $j$ runs over only on masses connected to $i$. Obviously if one pins down all masses, the problem has no solution unless the system is already in the minimum potential. In any other case, the solution is a square (if we assume that masses are hard disks!). Although the above potential allows masses to overlap.

To be specific, consider the following system:

Then I calculate gradient and energy for the system:

Then by using conjugate gradient, I try to find the minimum potential:

And finally, system reaches to this point: 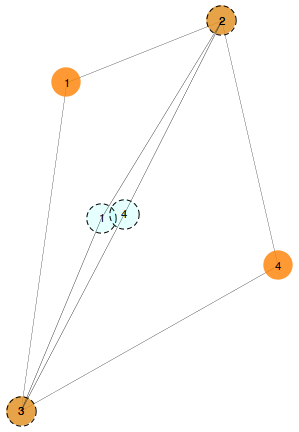 which shows 2 and 3 are held fixed.

Although I am aware that calculating energy of each spring twice is not efficient.

Here is your initialization code:

And your potential function:

Here is a function to display the current position of your masses:

There are many ways to minimize the energy. Here is one:

The result looks like a parallelogram in which the edge lengths are all 1.

This method is based on the original article. First we need to convert list of spring connectivity (spring) into a graph:

Then Kirchhoff (Laplacian/admittance/discrete Laplacian) matrix should be found using KirchhoffMatrix:

We also need to incorporate pinned coordinates into m by replacing the corresponding rows to zero except the diagonal element:

Finally the problem is reduced to solve a matrix equation ($m\mathbf{r}=\mathbf{b}$) in $x$ and $y$ direction:

And relaxed positions are simply:

Not the answer you're looking for? Browse other questions tagged programming graphs-and-networks mathematical-optimization performance-tuning or ask your own question.

9
How to get UV mapping of 3D tube

0
Finding resolution of an optical system using Rayleigh criterion
2
Mass Symbolic Manipulation with Subscripts? (from plaintext Input)
0
Solving linear system with constraints
9
Finding the path in a graph from A to B then back to A with a minimum of shared edges
3
Best way to write a system of conditions
0
How to solve a nonlinear system of equations with exponential terms