How do I make a string literal without having to escape backslashes?

How do I do this? This would be really nice for regular expressions.

We can implement a raw string syntax using the global variable $PreRead, which "is applied to the text or box form of every input expression before it is fed to the Wolfram Language." Using $PreRead, we can get at the string before any interpretation has been performed on it, replace it with the corresponding InputForm expression, and send that along as input to Mathematica.

Here we define a RawString "head" that signals that the RawString expression will be automatically replaced by the InputForm of its argument before being used as input:

Note that we are dealing with the box form prior to any evaluation, so we have to use separate patterns for prefix and postfix notation. The StringTrim is inserted so that it will take effect after the input string is interpreted to remove the extraneous opening and closing quotes.

Now we can enter

as long as each raw string is explicitly the argument of a RawString, i.e.,

To enter the string in without double backslash, you could use a TextCell as follows:

On the first line, I open a text cell and enter the text as you wanted to type it. The ToString knows how to convert the text cell to a string, as is shown in the last FullForm output.

You could also replace ToString@@ by First@.

It is not a direct input form as you describe but Mathematica will insert the escapes for you in the right circumstance. If you copy the verbatim text \abc\def\ghi\nop and paste it between quotation marks in a Notebook you will get a dialog: 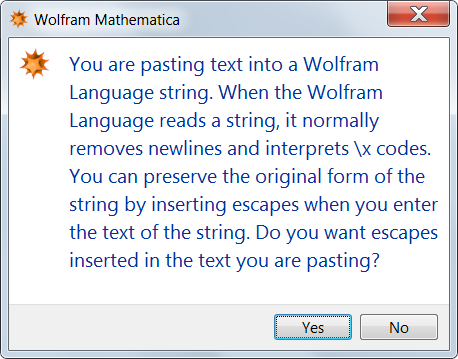 If the string is in an external file Import will handle it correctly. For example if we put \abc\def\ghi\nop in a file named foo.txt we can then use:

The FullForm is added merely to show that the escaped \\ are in fact present.

Not the answer you're looking for? Browse other questions tagged string-manipulation core-language input-forms or ask your own question.

124
$\LaTeX$ and Mathematica
15
How do I prevent Mathematica from reformatting the expressions that I copy as LaTeX?
10
Mathematica equivalent to Python long raw strings? handling escape characters in packages
2
Input a non-string input — output as a string

1
Deleting all characters in a string that do not belong to a small set of elements
7
String templating
12
Splitting strings into letter keys and integers
1
Are all of the numbers in my file legitimate hex numbers
3
Please help translate regular expression to StringExpression
2
How to repeat a string?
3
How to use Write[stream, expression] without automatic addition of next line character
11
How to get the longest bracket pairs from a string
1
Sorting alphanumeric strings
9
How to convert a string having nested parentheses into an expression?