This is surely a duplicate, but I cannot seem to find a similar question.

I use NDSolve to find an InterpolatingFunction y[t] which solves a differential equation with some initial conditions.

I have a function f[t] defined in terms of y[t] and some other stuff.

I consider the function f[t] over a particular domain {t, 6000000, 30000000}. The function always exhibits the same qualitative behavior over this domain: it decays toward 0 to the left, and oscillates between 0 and 3 to the right. However the location in the domain where it transitions from one behavior to the other is unknown.

I would like to identify the first time f[x] == 1 in my fixed domain. Below I show some examples indicating what the function might look like and which solution I wish to identify. 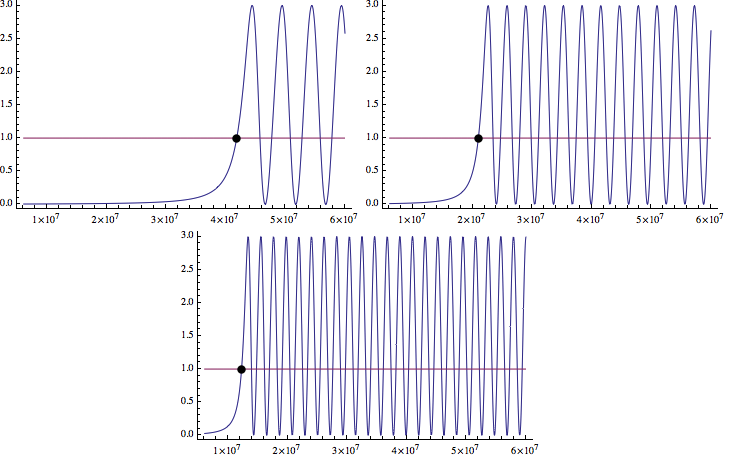 Obviously a naive use of FindRoot is not going to find the particular solution I am interested in, but yet it doesn't seem to me as though this ought to be a very hard problem. I only require 3 significant digits of precision or so.

Note: Edited to include slightly more detail about the NDSolve portion of the problem, since it turned out to be relevant.

@belisarius recommended I make use of the WhenEvent[] function in the original NDSolve[] that produced my interpolating function.

Since my NDSolve command finds y[t], but I am looking for solutions to an equation involving f[t], which is not defined until later, I cannot implement this suggestion in a completely straightforward fashion.

However, it happens to turn out that the maxima in f[t] always occur at the zeroes of y[t].

So I use WhenEvent to make NDSolve record the zeroes of y[t] as it solves:

Now I know that the solution I want — and no others! — occurs between the left edge of my domain and zeroes[[1]].

So I use FindRoot with two initial times, one at the left edge of the domain, and the other just a smidgen to the left of the first maximum in f:

Since f[t] is monotonic between those two points, FindRoot will stay in-bounds and Newton's method is sure to converge. Hooray!

Use a starting point to the left of the desired solution:

of course whatever is the leftmost point defined for your interpolating function.

Not the answer you're looking for? Browse other questions tagged interpolation equation-solving or ask your own question.