This is very strange. As I was trying to debug this problem, I noticed when I add Trace then I get lots of internal errors generated. This also happens the first time after the kernel is started. So, with new fresh kernel, typing 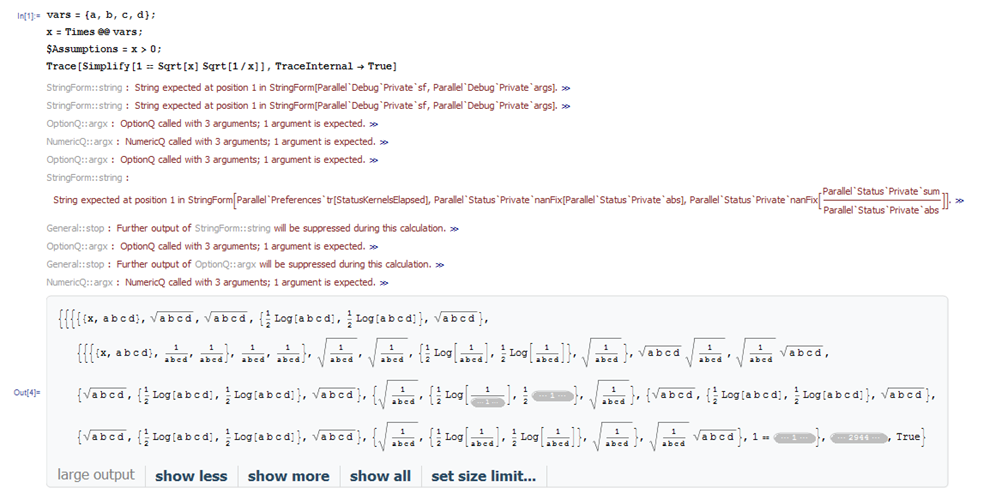 But that is not all. Now with fresh kernel again, just adding one more variable to the list above, to make it 5 variables now, instead of 4, i.e. like this

Now there is no error ! (make sure the kernel is fresh one before).

Why does it fail when there are only 4 variables in the list? What is so special about the number 4?

The ultimate cause of this problem is an evaluation leak that occurs when an expression of the form MakeBoxes[StringForm[...]] is evaluated.

MakeBoxes has the attribute HoldAllComplete. This allows it to create the box representation of any expression without evaluating it. For example:

Notice how the StringForm[...] expression has been evaluated to produce the label for the InterpretationBox, in addition to the unevaluated expression that serves as the content of that box.

This is all well and good when the StringForm expression stands alone, but what about when it is an expression awaiting the values of local variables, like this:

Here we see a message very much like the one exhibited in the question. A simple RowBox is still generated, despite the message.

Isn't it invalid to have a free-standing StringForm expression like that? Yes, but we must remember that MakeBoxes is invoked recursively on all of its subexpressions. So we get an unexpected message when we try to generate boxes for a perfectly valid definition like this:

The StringForm did not start out to be an invalid free-standing expression, but the recursive action of MakeBoxes made it so.

How do we know that StringForm is to blame?

If we evaluate the expressions from the question with the debugger turned on and message breaks enabled, we see this stack trace:

We can see that StringForm triggered the first error, and we can see all of the behaviour described above in the preceding stack frames.

Why does the error only occur the first time the expression is evaluated?

The first time that the expression is evaluated, a great many packages are auto-loaded. Normally, this loading process is not shown by Trace. But because the example in the question uses TraceInternal, all of these internal activities are shown in the trace.

The first message is generated when MakeBoxes is called upon an auto-loaded definition that looks like this (in outline):

In subsequent evaluations, these auto-loads do not occur so neither does the problem. Also, if we turn off TraceInternal, then the problem does not occur on even the first evaluation since none of the auto-load expressions appear in the trace.

Are all the messages due to this one problem?

No. Some of the messages are knock-on effects of this first message. Others are due to further occurrences of StringForm. And yet others appear to be due to similar evaluation leaks in other components.

Why does the problem only appear when there are four variables instead of three?

I'm not sure, but I have a guess. Observe the size of the trace output for each of the following variable counts:

Note correlation of error occurrence with the spike in the output size for quadratic and quartic equations. I speculate that Simplify uses much more elaborate techniques for equations of this kind. Perhaps part of that elaboration involves loading special libraries... and at least one of those extra libraries ends up loading the troublesome Parallel`Debug definition. Or it may be simply that the enormous size of the trace output crosses a magic array size threshold, triggering the parallel computation machinery.

Not the answer you're looking for? Browse other questions tagged error-tracking or ask your own question.

7
Problem with Simplify, Sqrt, and Set: What's going on?

4
Why these (error) messages?
62
Mathematica Debuggability
19
MathKernel doesn't return all Messages
4
Show error messages from collapsed sections
3
How to track accumulated error?
1
How to catch error messages from parallel kernels
2
How to implement an “if an error occurs”-condition in Mathematica programming?