I recently set about to re-compile some old (2008-2009) applications that use MathLink in preparation for creating new, modified versions. Mathlink has been deprecated but WSTP seems like a fairly painless replacement and I had no trouble getting the code to compile and the project to build under Visual Studio 2013.

Unfortunately, the resulting code doesn't run correctly. Whereas the old code, if double-clicked, did this: 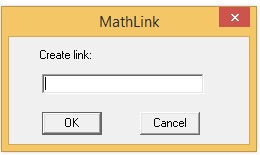 the new one does this

The "missing" DLL is definitely on the drive, and the project would not have compiled without it. Putting an extra copy into the application directory doesn't help.

Which seems to restate the problem in other words but doesn't bring me to a solution.

The DLL has been included in the project, but Visual Studio marks it "Does Not Participate in Build," which seems as though it might be a problem but it's not at all obvious what to change it to.

I asked the above question a long time ago and have since successfully written several WSTP programs. I can't say for certain what caused the above problem, but it is likely that I placed the necessary DLL in the source code directory rather than the Debug directory and/or failed to maintain proper path setups for resources in the Visual Studio IDE.

In my current work, I have copied the .lib files into Visual Studio's normal search path, and in the Solution Explorer I include only wstp32i4.lib among the Resource Files. I don't know if including the others causes problems, but it certainly doesn't help.

Also be sure to include wstp.h in the Header Files.

Not the answer you're looking for? Browse other questions tagged mathlink-or-wstp or ask your own question.