I am trying to build on a simple example here:

How can I make Plotmarkers be a function of points being plotted?

The description in the question suggests that you may really want to use BubbleChart instead of ListPlot.

You want the plot markers to be a function of the points, and that's exactly what BubbleChart is originally meant to do. It's a relatively new function, but I'll describe how to use it for a simple example based on your prime number table.

In a BubbleChart, each data point has three entries: the x and y coordinates of the point at which the marker is supposed to appear, and a "radius" variable r that determines the size and color of the marker.

The shape of the marker is set by the option "ChartElements", and I'll leave that in its default state (which is a disk as you asked for anyway).

This means that in addition to your table

we need a data table with three entries for each of the 25 points. For the radius of the disks, I'll pretend that I want to make the marker smallest when the prime number is closest to 50: 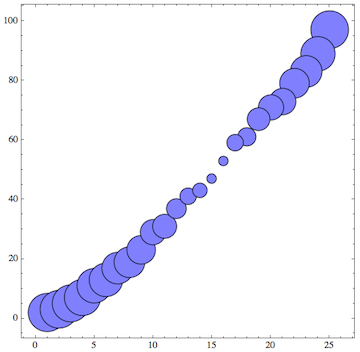 As an additional way of visualizing the data, we can use the third entry in the point's data to change the color of the disks: 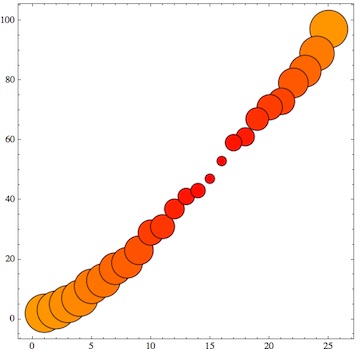 The documentation shows how you can use arbitrary shapes other than disks, too. It also shows that you can combine several data sets in a single plot if desired.

One additional issue appears in the answer by kguler and motivated Sjoerd's answer (both of which are fine so I upvoted them of course): it's the question of how to plot these data dependent plot markers and then also draw a line through the data.

The answer is actually very simple - and that also means kguler's answer can be used this way: just combine the BubbleChart with a separate ListLinePlot of the same data using Show: 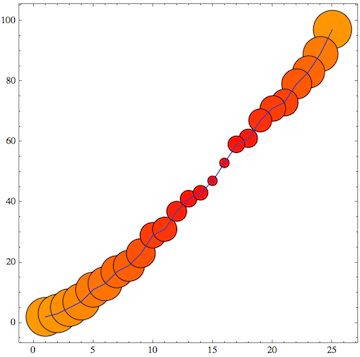 That should cover all the possible issues.

There is another alternative to get individually styled plot markers. This may be useful when you don't need or want the dynamic interactivity that's built into BubbleChart by default. Of course in general it's nice to have tooltips, mouse-over highlighting etc. But it does require enabling dynamic interactivity in the notebook, whereas ListPlot doe not require that.

An approach that's closer to ListPlot in its lack of interactivity would be to use ErrorListPlot, which requires loading the ErrorBarPlots package. The idea is that an ErrorBar is a kind of plot marker, and it obviously is also designed to vary from point to point. Furthermore, it's possible to define custom error bars (including disks) by specifying the option ErrorBarFunction.

Continuing with the above prime number example, the data list can be simplified by leaving out the first index corresponding to the x coordinate.

Then I load the package and define a function to create a more or less arbitrary "plot marker" whose size and color are determined by the second number in each tuple of data1, which is passed to the function as a variable err. I also let the rotation angle vary as a function of the x coordinate which is automatically generated here). This is done in errorfunction - and that's where you can do all your own customization (for variety I chose squares instead of disks here): 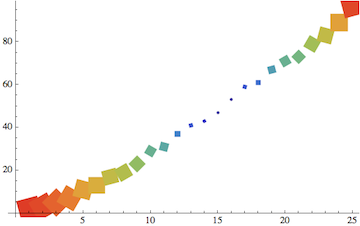 The actual PlotMarkers should be suppressed so that only the error bars are left to play the role of markers. That's why I added PlotMarkers -> "". 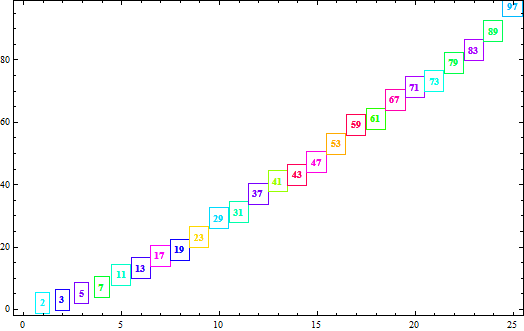 EDIT: The issue of Joined plots can be solved in a number of ways. In addition to using Show or Inset as suggested by Jens and Sjoerd, one can simply append the original data set as an additional series in the first argument of ListPlot: Let 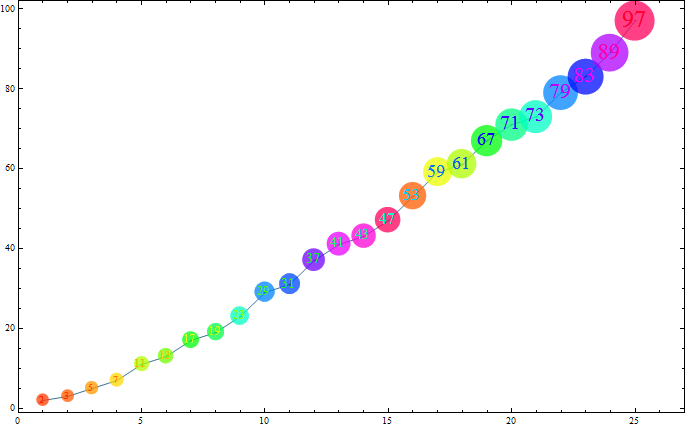 Both Chris and kguler's solution work by letting ListPlot think it is plotting 25 data sets of 1 point each. ListPlot lets you define a plot marker for every dataset separately.

That is all great and fine as long as you don't want to connect the points using the option Joined->True. Since all points are the single member of a dataset no line will be drawn.

By manipulating the output of the original plot it can still be done. ListPlot generates a GraphicsComplex in which every data point is represented by a single number. This number is used to position the Inset-s that are used to show the plot markers.

So, here is the original plot with Joined option added and assigned to a variable:

Replacing the plot markers with something else dependent on the coordinates: 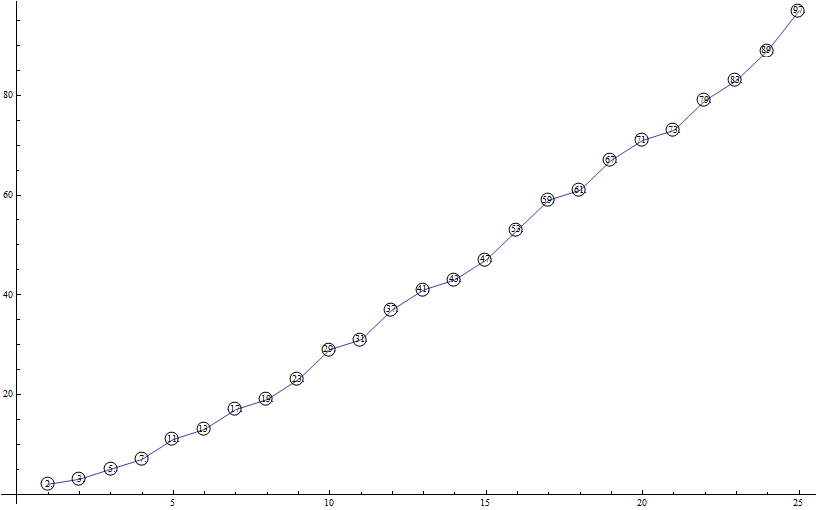 Something along these lines perhaps: 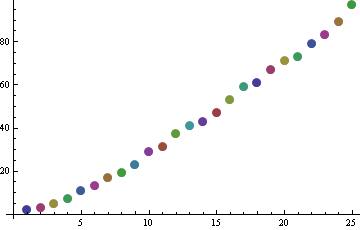 Not the answer you're looking for? Browse other questions tagged plotting graphics charts or ask your own question.

0
ListPlot, PlotMarker -> y value
65
How can we make publication-quality PlotMarkers without version 10?
8
Are plotting markers with inscribed letters possible?
2
Applying a function to list of points and plot the results in ListPlot
4
Plot markers for monthly data
4
Creating plot markers with centered text
2
Loading and formatting data for plotting standard deviation bars on top of data
2
Change the point size in ListPlot
1
Label Markers On ListPlot, but for Two Dimensional Data
1
Real, scaled sizes of bubbles in bubblechart
See more linked questions

2
ListPlot : range from $0$
1
ListPlot and AspectRatio
0
Plotting cicle using ListPlot
6
How can I make Plot or ListPlot scale the plot automatically for a given domain?
4
ListPlot with X- and Y-range (whiskers & fences) for each point
4
Overlaying custom plotmarkers onto graphics primitives using Show
2
Rewrite ListPlot using Graphics while perserving point color?
1
How to confine the region for an object to be displayed in Graphics?
2
Matching prolog and plotmarkers sizes